Soccer96 is a duo built around the keyboards and drums of Danalogue and Betamax respectively and their pseudonyms give a good indication of the kind of sounds to expect. This is music recorded and designed to play live and not be heard from an iPod in a coffee shop, no bedroom electronica here – no sequencers or laptops were used at all on the album. The drums are heavy and the analogue synths pleasingly squelchy and bassy, with 8-bit style squeaks and beeps adding retro texture. 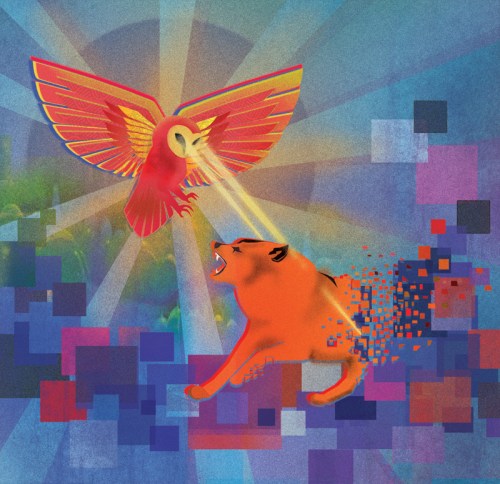 Opener ‘California” comes across like a rougher version of Air, complete with hypnotic repetition and vocoder style vocals. A pleasingly erratic gameboy solo (it probably isn’t a Gameboy, but yoiu get the idea) and a nicely jazzy end section make for a very satisfying start. Song two, ‘SuperWarrior’ is even more interesting as it reveals a bit more about what kind of band this is. The synths are at the forefront, and you can’t ignore the prog elements, but psych/drone rock is the predominant feel here, The Besnard Lakes come to mind here. Nice use of OTT choral vocals on the track too, combined with some first rate drumming this is a track to play loud.

‘Level 8 – Clouds’ (one of several video game references, including a song called ‘Yoga Flame’ and the bands name itself) sees us in floatier and bleepier territory, building nicely and then dropping back again over the tracks 6 minute run time. Track 4, ‘A Call To Arms’, is the album’s mid-point and the best track on a record or consistently strong tunes. The urgent keyboards, spritely drumming and punky vocals create a sound which is something like a collaboration between Devo and Underworld and every bit as good as that suggests. It also contains some good lyrics, “I’ve been a long time working in jobs that suck the soul right out of my body” is a pretty good mantra for disaffected youth.

‘Adaptatrap’ is built around percussion, layered vocal snatches and an excellent Dr.Who theme bass line, but does feel a little throwaway next to the album’s other songs. No matter, the dubby ‘EarthAttack’ and epic ‘Yoga Flame’ are both great and bring the album to a close all too soon.

That is perhaps the biggest criticism of the record, at only seven tracks long it does feel a little short. A couple more songs of a comparable quality would have been nice, but better an album of pretty consistent quality than a few fillers thrown in to boost the play time.

This is an album built around some excellent synth playing and well constructed melodies, but it is the more organic elements that lift this up a notch. The nicely varied use of vocals, hand-claps and especially the drumming which is first rate throughout and will no doubt sound great live. This is a very satisfying debut album and a very positive sign of things to come.

The album can be purchased in physical and digital forms from http://www.demonsarereal.com.