Part of me still thinks of Elvis Costello  as a bespectacled, angry young man, singing in grainy TV footage in a tight suit, about his aim being true, failing to stand up for falling down and the plight of British industry under Margaret Thatcher. 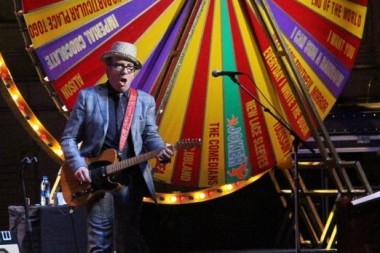 Of course I know he’s not. In reality he’s a portly 57-year-old and one of the music industry’s most prolific artists; dabbling in soul, classical music, country as well as excelling at the UK new wave genre that launched his four decade long career.

This latest live album release is testament to what is a stunning track record in music but crucially has a nice twist to it. The tracks are chosen by a giant game show spinning wheel, which is spun by fans and was first used by Costello and the Imposters on their Revolver Tour in 1986. For this live album  the giant wheel was used over two nights at The Wiltern, Los Angeles in May 2011.

When this album was initially released last year, as a limited edition box set featuring all 34 songs played over two nights plus DVD, book and tour poster, it caused a minor stir with an eye popping £176 price tag. Even Costello himself said it was a waste of money.

With die-hard Costello fans shunning this mammoth priced album his record label Universal has decided to re-release it in a streamlined CD and DVD pack, featuring 16 tracks on each. Priced at around £13 this is ironically great value considering its preposterously priced initial release.

True, it’s a little cheesy at times, but I  can’t fail to be bowled over by a giant spinning wheel triggered by a fan and prompting Costello and his band of veterans to ease into their showbiz versions of classics from Alison and Radio Radio to Watching the Detectives.

As is so many times said in live album reviews, it will not win over any new fans. But if someone wanted to hear Elvis Costello by now surely they would have done so. For Costello fans it’s a pretty decent package even if some of the versions are little vaudeville at times. I guess though, it’s hard to be anything else with a whacking great spinning wheel behind you.