Day two of the Great Escape was a more relaxed affair than the first, a later start, an earlier finish and no alcohol. It is a pretty tiring weekend and it seemed the right thing to do to take it a bit easy on the second day. That didn’t mean I wasn’t going to see a load of great music, in fact there was plenty of good stuff to enjoy. 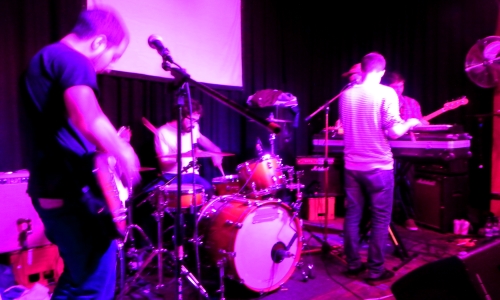 First venue of the day was The Albert to check out some of the Catalan acts that are being showcased at the festival. The first one I saw on stage was Furguson, youthful and energetic noise pop with endearingly shouty vocals. The drumming was brilliant and the twin synths gave the guitar noise some real depth and texture, a lot of fun. Next up was Suicide of Western Culture, two hooded men behind a table of samplers and laptops and effects pedals and wires. A pretty uncompromising sound, very heavy and hard edged with a real darkness behind their techno tinged sound. On the screen behind them were projections of dark and disturbing images, corpses, military marches and other troubling subject matter. As good as they were it was not what on wanted on one of the first sunny days in weeks, it seemed wrong being inside in the dark listening to music much better suited for a late night set. 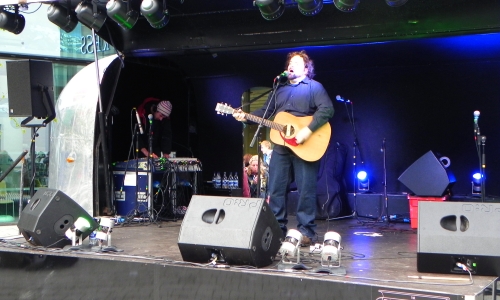 The rest of the afternoon was spent outdoors sampling the various bands playing at different locations around the city. Part of the fun of the Great Escape is music springing up unexpectedly and seeing music you hadn’t planned to as you make your way between other venues or just hang out in the sun. One pleasure of the day was catching a few songs by the ever reliable Brighton resident Chris T-T on the Hub stage. His mixture of political songs and AA Milne words set to music is a pretty unique experience and always recommended. 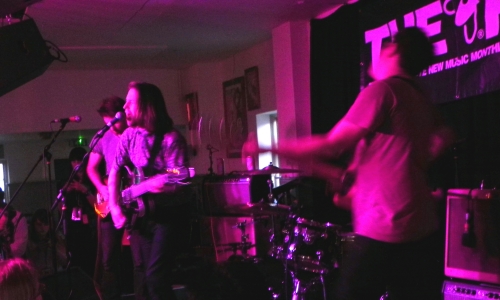 The evening held the prospect of an excellent triple bill in the Blind Tiger, a venue that was packed out for the evening and queues stretched outside around the corner. First up for us were Weird Dreams, melodic psych-pop that sits somewhere between Teenage Fanclub and a British version of The Apples In Stereo. They were good too, a nice sound played well and some great melodies on show. The bass playing was great, driving the songs along, and the bass player was the most lively stage presence. They did seem to struggle to keep the packed house engaged though, a big risk when some more eagerly anticipated bands are following you on the bill.

The next act on was ∆ (alt-J), one of the bands with a real buzz about them at the festival. Their sound seemed (like a numbers of new acts) to be influenced by the Beta Band, which isn’t a bad starting point. They were very popular with the audience and although they seemed a little tentative (more interaction with the audience is needed by most bands I have seen) it was a confident performance. The percussion was very interesting, as was the way they used vocals in the songs. Very enjoyable and definitely one to watch. 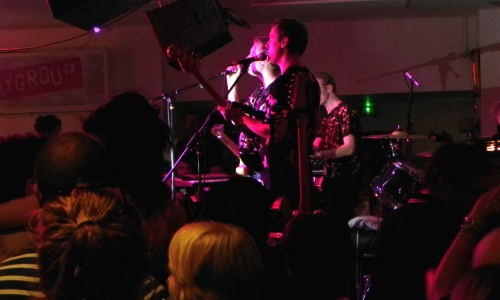 My final band of the day is one of Neon Filler’s favourites, Django Django. Despite creating a restless atmosphere in the venue by being so late on stage they won the audience around almost immediately. It was their second set of the weekend and if the first was as good as this one then they could well be the act of the festival (Saturday’s performances excepting). The Beta Band comparisons raise their head again, but with some Devo thrown in and a bit of the Phantom Band as well. That isn’t to say that they are derivative, they have a very strong identity and the pulsing rhythms and low harmony vocals were effective and captivating. It was the best audience response I have seen so far, and at times it resembled a rave at the front of the crowd. They might well be one of the rarest things in music, a good gimmick free crossover act.

Another excellent day of music, and an early(ish) night to prepare for a very full Saturday programme.