Refreshed after a sober Friday I made my way down to the Blind Tiger for an early afternoon set from Canadian garage popsters Hooded Fang. After another extended line check (they seemed to get longer as the weekend continued) they were introduced to us by the president of their record label, looking a lot like Dick van Dyke in his Diagnosis Murder years. When they finally got playing it was worth the wait, their very enjoyable debut album sounded perfect for a sunny afternoon in the crowded venue. The drum and vocal sound was spot on and reminded me a lot of White Denim, but with more of a classic 60s pop sound. The more punky tunes worked less well, but it was excellent start to the day. 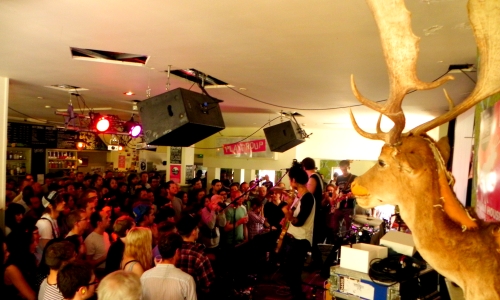 From here on in I decided that my plan was to try and catch as much different music as possible, even if that meant seeing only partial sets by each act playing. To this end I headed to the Komedia to see French electro act Cheveu play what was described as “Parisian pop” in the programme. Parisian it may have been, pop it certainly was not. It was a harsh and challenging sound where dissonant keyboards and distorted guitar were joined by looped screaming vocals. It was pretty good stuff, but for the second time in the weekend it seemed wrong listening to noise in a dark basement whilst the sun shone outside. 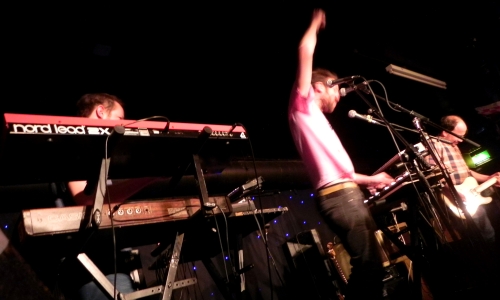 The main remainder of the afternoon was spent exploring the various bands playing outside, most of whom I couldn’t name. At times this was a disappointment, a trip to the Brighton wheel saw the final applause of a well received set, and at others it meant some new discoveries. Best of all was Me and the Bees at the festival Hub stage (much better used this year than last) a really charming female fronted act from Catalonia. They are a little amateurish but have enough good tunes and personality to carry it off, the perfect sound for a sunny afternoon by the sea. A less country tinged Whispertown 2000 springs to mind and it was the highlight of my afternoon outdoors. 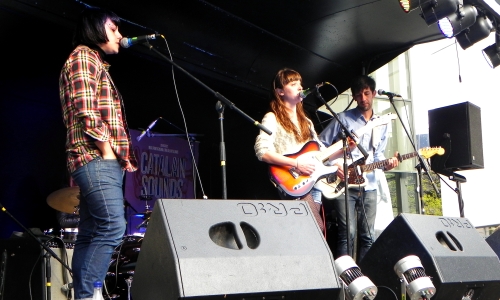 Me and the Bees

After a trip downstairs at Audio to watch Novella, an enjoyable if unexceptional piece of melodic guitar pop, the time to make a decision hits me. I had been dead set on a trip to the church to see Perfume Genius but a late changed of heart takes me to the queue outside The Komedia where everyone seems to be heading to catch the much hyped Alabama Shakes. I am pretty close to the front of the queue but it has been one in, one out for hours already and the wait is a long one. I’m at the point of heading elsewhere when a few people leave and I get access to the venue, but a lot of others will queue for a long time and not make it in until the band is almost over.

First on stage when I do get in is Howler, and they make a pretty fun noise to the packed expectant crowd. They sound like a band destined for the main stage at the Reading Festival, but they are enjoyable enough and pretty aware that they aren’t the main attraction. When Alabama Shakes take to the stage they are on to a pretty guaranteed winner, they would have to have been pretty bad to fail to get a reception from the partisan crowd. the good news for them, and us, is that they are actually pretty good. Are they the best new band in the world (as the NME stated this week)? No, they probably aren’t, but they are very very good at what they do. And what they do is nothing new, a rootsy mix of The Band and classic 60s soul, but they do it better than most. In Brittany Howard they have an excellent front-woman who can really sing, and plays the guitar with a lot of fierce energy as well. The one thing that does seem a little odd is why the NME have picked up on them, they are all round a Mojo kind of band. 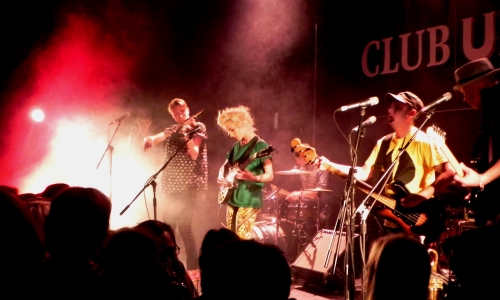 I decide to end the evening with a trip to The Pavilion Theatre and manage to jump the queue and get in to see the end of (deep breath) Beth Jeans Houghton & The Hooves of Destiny‘s set. It is good stuff, real energy and another excellent singer, and the packed house laps it up. I don’t see the whole set but I don’t think the crowd made a bad choice opting to come here rather than stand outside waiting to see a glimpse of more hyped act up the road.

I’m pretty wiped out by this time but I stay long enough to see some of the EMA set before I head home. The songs seem quite full on to fall into the category of “sparse confessionals” as described in the programme (which seems to have only a loose understanding of most of the bands) but it sounded great and the band looked good on stage.

Heading home I reflect on the three days of music, and it is is notable that I haven’t seen one bad act play. I may have been lucky, but I suspect that the overall standard is just very high. The event is brilliantly organised and an absolute steal at under £50 for the chance to pick from over 300 artists at over 30 venues. Even if you don’t have a ticket there are the outdoor shows and the Alternative Escape shows (most of which are free). I’ll be back next year and I have no doubt it will be another big success, and a key fixture in the musical calendar.