Arriving at Alexandra Palace for the third day of ATP’s annual I’ll Be Your Mirror event we were greeted by few people and blazing sun at the attractive London venue. The idea of spending this time in a dark hall listening to Forest Swords rather doom-laden sounding set just didn’t appeal. Instead we opted to go to the light and stuffy Panorama Room and take part in the amusing pop quiz on offer. We came forth out of 18, not bad but outside the prizes. 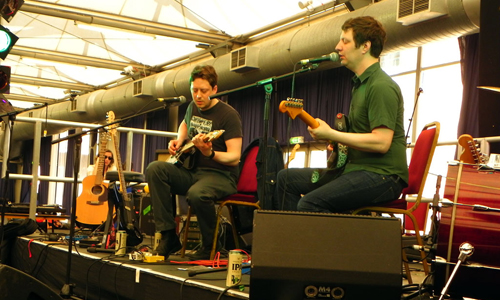 After the quiz we made the move tyo the dark hall to check out the end of the  Blanck Mass set. I think I would enjoy the brooding electronica and big beats as part of a soundtrack, but stood motionless in a hall watching a man and a laptop (albeit with some pretty awful visuals) just seems to be a weird way to spend your time.

The blazing sun pulled us outside between each act, and an ice-cream break (with deer viewing) seemed like the right thing to do rather than stick in the hall for Demdike Stare. They may have been brilliant, but my chocolate sundae was nice enough to take that risk.

Returning to the music we went back to the Panorama Room for a quiet afternoon set by Tall Firs, a band that had impressed my colleague at the recent Jeff Mangum ATP. They were good, and their peaceful sounds were perfect for a sunny and soporific Sunday afternoon. The problem lay in the venue and the lack of soundproofing in the room. The Panorama Room just wasn’t a very good setting for live music, something about it just screamed “wedding reception” and the windows behind the stage didn’t help the atmosphere. Worst though was when Thee Oh Sees kicked off in the main hall, drowning the band out for all but those in the first couple of rows. This lead to a gradual evacuation of the gig by most of the crowd, the band soldiered on but it seemed like harsh treatment for such a quality act. 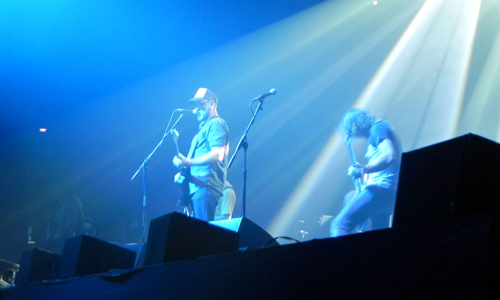 Things picked up in a big way when we took in our first full set in the main hall, one of the many reformed acts playing the weekend, Archers of Loaf. A booming ‘Audiowhore’ followed swiftly by ‘Harnessed In Slums’ set the scene for a full-on rock show by the band. The band look a little older but their sound hasn’t aged one bit and it was a fun set, with some impressive rock postures from their evergreen bass player. 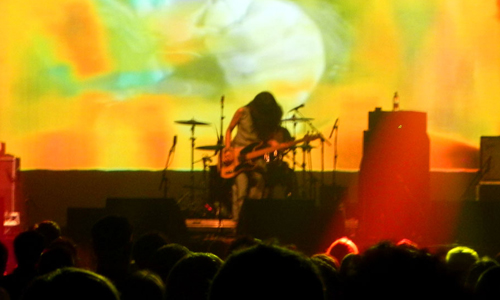 We stayed in the hall for another heavy guitar set, this time from one of youngest acts on the bill, Yuck. To be honest I have always been suspicious of them, their role as 90s rock revivalists seemed pretty pointless to me. Live on stage they were a revelation; heavy and melodic they presented a pitch perfect blend of Sonic Youth, Dinosaur Jr and My Bloody Valentine to the biggest crowd of the day so far. It was a well played set of good tunes, with some well chosen psychedelic visuals worthy of a Snub TV segment. 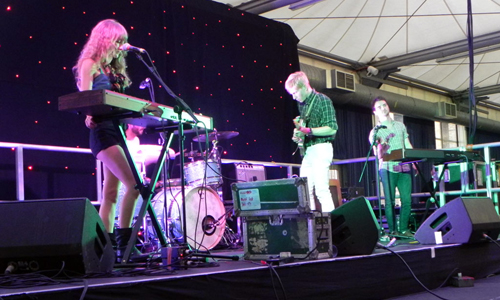 Third in a row in the hall was another band making a comeback, The Make-Up. I’ll probably get some negative comments for this (they seemed to go down very well during the few songs we endured) but they were without a doubt the worst act of the day. Ian Svenonius looked more like a joke-1970s light entertainer than the imposing gospel preacher of legend. The music on show was uninspired and Svenonius could only drop his microphone on the stage a few times before it seemed time to leave.

A return to the Panormama Room revealed no more atmosphere than before (a queue at the bar, people sat on the floor) but the soundproofing had improved and The Make-Up didn’t leak through to interrupt the set just starting by Tennis. Nothing earth-shattering here, just a well played set of pleasing pop tunes by the Denver band, formed around husband and wife duo Alaina Moore and Patrick Riley. It was the kind of set that becomes more likable song by song and abandoning The Make-Up proved to be the right move. 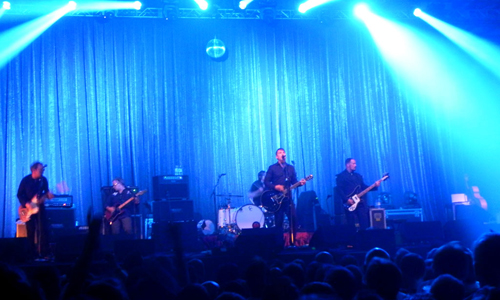 The final act of the night (El-P having pulled out of his slot) was the much anticipated return of the Afghan Whigs. Front-man Greg dulli has played over here many times in the last few years (in his Twilight Singers and Gutter Twins guises) but it is more than a decade  since the Cincinnati band last took to the stage in the UK. Bands getting back together often doesn’t work but from song one it was clear that the three original members, supplemented by an additional guitarist a keyboard/cello player and Cully Symington replacing Steve Earle on the drums, still had what it takes. A pretty faultless set, mainly culled from their last three albums, was played with energy and  enthusiasm by the band to a rapturous crowd,

If anything the songs sounded better than ever, the three guitars inter-playing to great a huge wall of sound and a collection of songs as good as you will hear anywhere. Dulli has softened a lot in the last few years (and lost a good few pounds in weight) and he seemed genuinely thrilled to be playing the songs to such an enthusiastic crowd.

90 minutes after they started, following a storming ‘Miles Iz Dead’, the band left the stage for the second and final time of the night. Slightly deafened but happy we left the Alexandra Palace knowing that for all it’s flaws the Sunday of ATP IBYM was worth every penny.