Deerhunter have named their fourth album Halcyon Digest for good reason, as once again the US band serves up an unusual and effective mix of music that takes a range of influences from the golden years of rock n roll to the 1990s shoegazers. Halcyon Digest is lush, layered and timeless. Deerhunter’s most focused and accessible album yet.

Their last album Microcastle gave glimpses of what was to come but under producer Ben Allen, who also worked on Animal Collective’s Merriweather Post Pavilion, Halcyon Digest takes the band to the next level.

Opener ‘Earthquake’ sets the scene well as it builds up the ambience with guitar jangling in gradually. Cox’s vocals whisper in as the sound of a vinyl record’s scratch builds up with the layers and tension.

The catchy ‘Dont Cry’ is one of my favourites as is ‘Revival’, one of an array of standouts with its instantly appealing chorus and off beat guitar.

With ‘Sailing’ the tone dips, the guitar gets crisper and cleaner allowing Cox’s vocals to shine. For those that have seen Deerhunter live, the freakishly tall figure of  Cox is a sight  to behind, humble at times and ill at ease as a performer . It’s an image that belies the assuredness of his and his band’s ability. 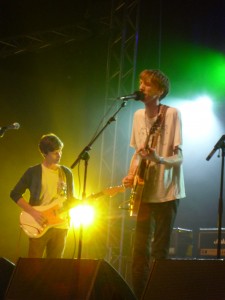 Other highpoints are ‘Memory Boy’, the nearest to a radio friendly single, ‘Basement Scene’ which comes at you like an indie rock Everly Brothers, ‘Helicopter’ like Donovan and ‘Fountain Stairs’ like the Velvet Underground. There is so much of interest here for both revivalists and those looking for something new.

‘Desire Lines’ is another standout, fantastic mazy guitar riff carrying this centrepiece track on the album.

Not many bands are so aware of their studio, their production and instruments as Deerhunter. Perhaps The Walkmen are the only others able to take vintage sounds to create something so contemporary.

So where does this compare with Microcastle? Better is the answer as Deerhunter deliver one of the highpoints of the year.