When lots of reviewers talk about Class Clown Spots A UFO, and the previous release Let’s Go Eat The Factory, they’ll tell you that it sounds like Alien Lanes. Alien Lanes is probably the quintessential album by the so-called “classic line-up” that reunited so successfully for these two albums (so far) but the alleged similarity with that album is misleading. The albums sound more like Alien Lanes than, say, Isolation Drill or Do the Collapse but these are very different sounding albums. What we have here is the sound of the mid-90s line-up as filtered through the mind of Robert Pollard today. The good news is that this has produced a sound that manages to be simultaneously classic and fresh. 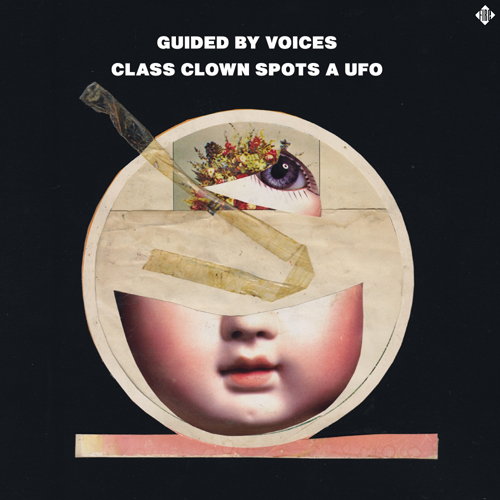 The album starts in typical fashion with the slightly ragged ‘He Rises! Our union Bellboy’ before slipping into Pollard’s favourite Who mode for the brief ‘Blue Battleships Bay’ – so far so good. Track three sees the first contribution from Tobin Sprout, ‘Forever Until It Breaks’, and marks the start of one of the strongest runs of songs on any Guided By Voices album. Five songs so brilliant, and so different, that they would be worth the price of the album alone.

The aforementioned Sprout song manages to captivate for over three minutes with a backing that loops the same single guitar riff throughout.  It is followed by the title track, one of those brilliant pieces of Pollard pop melody that you know he probably tossed off before breakfast one morning. ‘Chain To The Moon’ is less than a minute of echoed vocals and roughly recorded acoustic guitar. A demonstration, if one were needed, that this kind of demo quality track is an essential part of the Guided By Voices magic. ‘Hang Up And Try Again’ is a classic heavy riffed stomper that sounds like a lost Mag! Earwig song, albeit with slightly less refined guitars. Best of all is ‘Keep It In Motion’, a song that sounds nothing like any other Guided By Voices track, but one that fits in perfectly on this release.

The next couple of tracks are less than perfect, an overblown psychedelic wig-out (‘Tyson’s High School’) and an uncharacteristic weak Sprout offering (‘They And Them’), but inconsistency and questionable editorial decisions are such an essential part of the Guided By Voices experience that this doesn’t really matter. Particularly when the rest of the album is so good and the overall quality is of a standard that shouldn’t be possible from an artist who is on his 15th album into a decade which is less than three years old (15 albums is an estimate -it is hard to keep count).

The variety on this album is typical of Guided By Voices, but even in those terms it is still an impressive achievement. The album has spawned three singles, the title track, ‘Keep It In Motion’ and ‘Jon The Croc’. I struggle to think of any artist that could release three such varied singles from one album, and for them all to be as good as they are is even more impressive.

When Guided By Voices returned people seemed genuinely surprised how good their “reunion” album was. Class Clown Spots A UFO proves this wasn’t a fluke and, in fact, is just that little bit better that its predecessor.