2012 seems like a slow year by Robert Pollard standards, it is almost October and this is only his second solo album release. Even with three Guided By Voices albums and touring duties it is a slowdown compared to 2011 where he released six albums across five different identities, including the years best album in Boston Spaceships’s double album final release. Five albums in one year (and eleven in two) is an absurd amount by any other artist, but the prolific Mr.Pollard has never had a problem with song writing quantity. 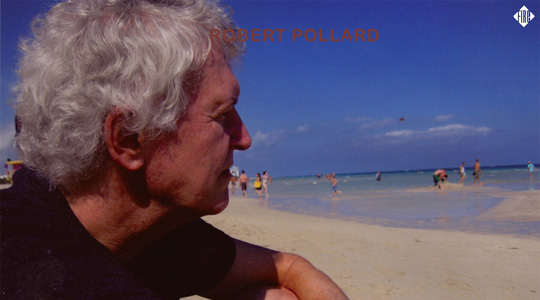 The song writing quantity has sometimes lead to a quality control issue, and this has always been most noticeable on his side projects and solo releases, with Guided By Voices and then Boston Spaceships being the vehicles for his most structured albums. Recently though he has shown more of an even standard on his solo offerings, something that has reduced the number of throwaway numbers but has also made his work just that bit more predictable.

From that point of view Jack Sells The Cow doesn’t start off brilliantly, ‘Heaven Is A Gated Community’ is a Pollard by numbers mid-paced rocker that sounds all too familiar. It isn’t a bad song, Pollard is too good a writer for that, but it doesn’t grab me or offer anything new. Song three, ‘Who’s Running My Ranch’, is where the album really starts to kick in with voice samples, vocal overdubs, Batman theme bass and some pleasingly erratic guitars making the song an early high-point. It also illustrates a step forward for his work with Todd Tobias as they seem to be more comfortable and adventurous in the studio.

There are also a couple of songs that throw back all the way to the first ever Guided By Voices release, Forever Since Breakfast, in that they demonstrate Bob’s early REM influence. This is most notable on the bounce and jangle of the sprightly ‘Pontius Pilate Heart’, this is alt-pop at its best and could easily have been sung by a young Michael Stipe. Hearing Bob sound this free and light of touch is refreshing and it is on these songs that the album makes its mark.

There are some great noisy rockers on the album, ‘Fighting The Smoke’ has some beautifully dirty bass sounds, and nobody else does over-effected vocals this well. However, it is on the quieter moments where the songs really shine through here. ‘Red Rubber Army’ is one of those songs that sounds unique and familiar all at once, a melody so deceptively simple that you know Bob wrote it in a few minutes, close to perfect.

Robert Pollard will release better solo albums than this, possibly later this year, but by any standards this is a good record with a few moments of genuine genius.