The former Hüsker Dü and Sugar man has gone back to basics for his first album in three years. Amid an eclectic career, which has included devising TV wrestling shows and DJing, Mould has returned to what he does best for this album; fronting a three piece indie rock band with his gigantic voice and crunching guitar. 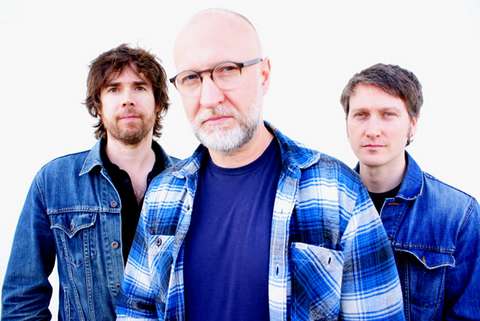 Settling in nicely as the godfather of indie rock Silver Age is an unashamed success, packed full of the strong melodies of the best of his Sugar and Husker Du output. Having a band he clearly trusts to carry his songs helps, with indie rock’s go to drummer Jon Wurster (Superchunk, The Mountain Goats) and bassist Jason Narducy giving this album a vibrancy and sense of youth that masks his 51years. Watching Mould tumble around the Letterman studio last month, he still looked like the 20 something from Minneapolis with a flying V guitar in Hüsker Dü, even though the hair is greyer and the guitar has long been upgraded to a blue Fender Stratocaster.

The Descent takes the coveted third track slot, reserved for the lead single on all Mould’s albums, and deservedly so. On a par with Sugar’s If I Could Change Your Mind with its ascending chords and life affirming lyrics it is already among Mould’s best singles. Releasing it ahead of the album has also helped the album skirt the Top 50 in the US Billboard charts, no mean feat for a middle aged man and an album of just drums, vocals, bass and guitar.

But even singling out The Descent seems somehow odd, when the album’s strength is the consistency across all 10 tracks. From the crunching guitar intro of opener Star Machine to the build up on final track First Time Joy the album is full of rage and melody, to paraphrase the title of his recent illuminating autobiography.

Now signed to Merge records, Mould has clearly found the right label to work with as he continues to enjoy influencing the young and reminding older music fans of his talent. The label is also managing the reissues of Sugar’s albums, something that has clearly rubbed off on Mould in creating Silver Age.