Of The New Pornographers many talented members Carl Newman’s solo output has arguably been overshadowed by the more complete work of Dan Bejar (aka Destroyer) and Neko Case.

Bejar’s Kaputt was a deserved fixture on many 2011 best albums lists and Case, who has delivered a number of sublime near perfect country tinged gems such as Middle Cyclone and Blacklisted during her solo career. 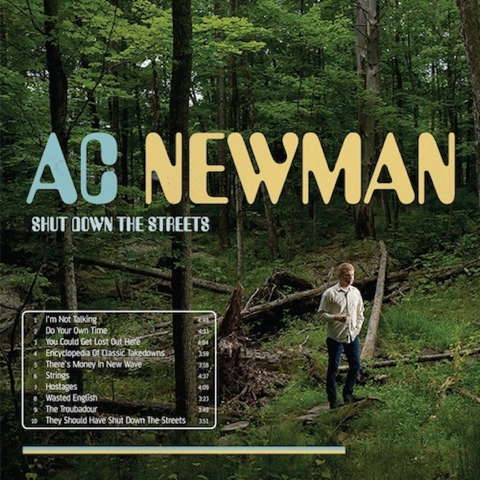 Sadly Newman’s two solo albums, also under the name A C Newman, before this year have been tame in comparison. Slow Wonder (2004) had a handful of good tracks, mostly at its powerful start such as Miracle Drug and On the Table, but the production suffered from Newman’s basic drumming arrangements. And while this was addressed on 2009’s Get Guilty, with the hiring of drummer Jon Wurster, the album still had too many fillers. It was also too akin to the New Pornographers weakest album to date the lacklustre Challengers.

But finally with his third release Shut Down the Streets, Newman has an album to rival his fellow supergroupers. An emotional year for Newman, in which his mother died and his son was born, provided the moving inspiration for an album that ends up being a celebration of life and makes the listener feel good to be alive.

A considered approach to production, with deliberate nods to the 1960s such as on Hostages, gives Newman’s pitch perfect vocals the chance to shine. The album does slip a little into dad rock territory at time, which perhaps is not a bad thing for a new dad like Newman. But at least fatherhood appears to have driven out his usual opaque lyrical style for a directness to finally match the punch of his music.  Lines such as “we’ve been waiting for you” on Strings about the birth of his son may sound corny, but at least they are to the point.

The crowning glory though is his decision to enlist Case for backing vocals duties throughout. Their harmonies are one of the wonders of the modern music world and in the absence of a New Pornographers album this year it’s great to hear them together again. The track Encyclopedia of Classic Takedowns, in particular leaps out as if it were classic New Pornographers thanks to Case.