As music journalists we work to a strict set of standards, setting ourselves above the trappings of the music business as we strive to uncover the truth with honour at every turn.

Having said that we’ll pretty much do anything for some chocolate. The PR people at Fire Records have clearly recognised our cocoa based Achilles heel and, in promoting the forthcoming limited edition 7” release of the Lemonheads’ 1989 classic Mallo Cup, have decided to include a couple of real life Mallo Cups – it’s a nice chocolate tea cake kind of thing. 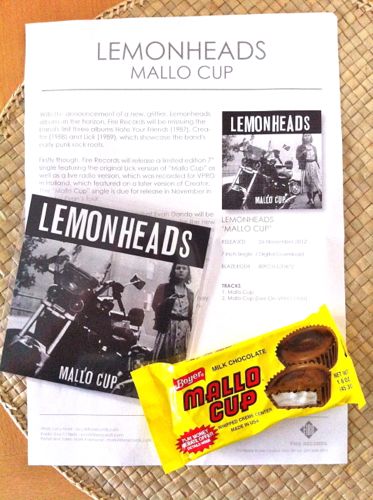 As huge Lemonheads fans we’d have probably promoted the single anyway, but the chocolate certainly helps.

The single is being released on 26 November ahead of a string  of reissues by Fire Records of the Lemonheads first three albums: Hate Your Friends (1987), Creator (1988) and the album that first featured Mallo Cup, Lick (1989).

All three are reissued early next year. Also in the pipeline is a new Lemonheads album that reunites Evan Dando with the band’s original co-writer Ben Deily. This new release will be produced by Ryan Adams.

Also featuring on the single of Mallo Cup is a live radio version of the tack recorded for VPRO in Holland.