There’s a tangible ghostly quality to this first EP by The Revival Hour, the latest musical project of Asthmatic Kitty artist DM Stith and The Earlies’ samples man JM Lapham.

In borrowing heavily from the 1950s and early 1960s the pair have created music the  battered spectre of James Dean would have listened to on the radio of his mashed up Porsche 550 Syder in 1955, as he fatally collided with a 1950 Ford Tutor and began his Powell and Pressburger-esque ascent to heaven. 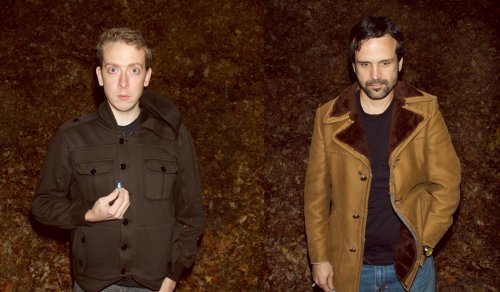 We had an inclining  the pair would produce something remarkable with the release last year of their first single Hold Back, but this EP is a far darker beast, taking the listener right into their vintage world through Stith’s haunting voice and Lapham’s soundscapes. Opener Hypergiant has no lyrics just Stith’s voice oozing through the mire before the thudding deep bass and reverb heavy guitar of second track Pyre appears as Dean, Buddy Holly and other tragic ’50s icons ascend the heavenly stairway.

Third track Beehive sounds like an absurdly beautiful blend of Roy Orbison and The Cocteau Twins and provides the most relaxing moment on the EP before the downright frightening guitar chaos of Fire Season. Final track Altercall focuses back on Stith’s voice, this time soaring above the 1950s “shoowooodooup” backing vocals as the bloody but peaceful Dean finally reaches the pearly gates.

An uneasy listen in places, joyously uplifting in others, this EP is like nothing you will hear all year. Wholly original, it serves as a powerful teaser for their debut album, which is being released next year and is set to feature contributions from Sufjan Stevens and My Brightest Diamond among others. We made this act one of our bands to watch in 2012 for good reason and this EP has more than delivered.