It is hard to remember what the first album that I purchased (with my own money for myself at any rate) was. I believe that it was Peter Gabriel’s So in 1986 aged 14, neither a terrible start nor one that I look back at with a huge degree of fondness. I do know what the first great album I purchased was, The Name Of This Band Is Talking Heads in the same year (from the long gone Tilbury Gig in Brighton’s St.James’s Street). Now this was a great collection of live recordings by a band that would shape my love of music as much as any other. 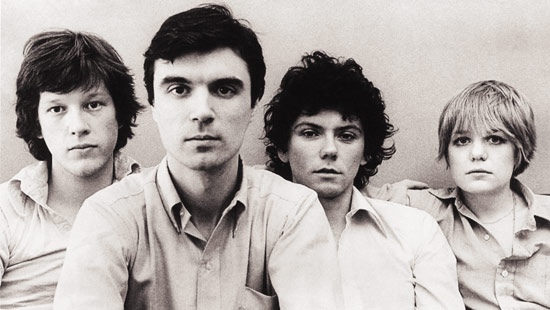 I first heard the band in a friends bedroom around a year earlier, the soundtrack to the legendary concert film Stop Making Sense’. In those days (nostalgia time) acquiring lots of music was difficult without a lot of disposable income (we didn’t have a tape to tape recorder yet) and that meant albums got a lot of repeat plays. This means that the first Talking Heads song I remember hearing was the solo acoustic version of ‘Psycho Killer’ that opens the performance. It is a wonderful song and a brilliant performance, but it is one of the least representative songs in a very varied body of work. Other than the vocals and lyrics of David Byrne none of the signature elements of the band is on show. One of the great things about Stop making Sense is the way it builds and shows the band in several stages of development, leading up to the big new-wave-funk-pop big band that they would be best remembered for.

Now I am a big fan of their earlier more sparse sound, but there is a real magic to the extended Talking Heads live show from the mid-80s, with some of the best musicians of the era augmenting the core quartet. Even better in some respects than the band on show for Stop Making Sense was the band line-up that toured Remain In Light, featuring King Crimson’s Adrian Belew on guitar. A brilliant performance of ‘Crosseyed And Painless’ live in Rome is embedded below.

I was lucky enough that the year I discovered the band was the year that they would release Little Creatures and have a two top 20 hits with ‘Road To Nowhere’ and ‘And She Was’. These were brilliant singles with great videos and represented the first time that one of “my” bands would cross over into the pop mainstream. The downside of discovering the band at this time was that after the tour that spawned Stop Making Sense would be their last and they would never play live again (other than at their induction to the Rock and Roll Hall of Fame). I’ve managed to see three quarters of the band live (albeit not in one place) but not getting to see them play as Talking Heads will always be a hole in my musical life. It also means that none of the songs from their last three albums have ever been played outside of the studio by the band which seems a terrible shame.

The good news about discovering the band in 1985 was that I heard five album from their back catalogue to discover, each of which remain firm favourites to this day. They are also the albums that I have owned in the most formats having purchased cassette, vinyl and CD copies of most of them, with remastered CD versions of a couple meaning I have purchased them four times over the last quarter century.

Each of these albums from the jerky sparse  new wave on 77 to the synth laden funk-pop on Speaking In Tongues is uniquely brilliant and show a peerless progression of sound. It is remarkable how few false steps the band took in their career to that point. A couple of songs don’t quite hit the mark, and I feel that Remain In Light tails off a little on side two, but considering the overall quality of their output I’m picking holes here.

After Little Creatures things do start to move downhill a little as the band started to fracture and tension between David Byrne and Tina Weymouth in particular drove the band to split. True Stories sounds like what it was, a collection of soundtrack songs played by the band and, although I have grown to love it, Naked seemed very disappointing on release day.

All four members of the band have done good things away from Talking Heads, Jerry Harrison mainly as a producer, Frantz and Weymouth as Tom Tom Club and Byrne in a variety of guises (including my personal favourite album of 2012) but nothing that matches their best work as a combo. This is highlighted to great effect on the brilliant Chronology DVD that takes you through the bands live performances from their early days as a trio through to the big band on the mid-80s and they brief reformation in 2002.

Picking ten tracks from one of your favourite artists is always hard, pretty much every one of their albums is brilliant from start to finish, but pick ten tracks I will. My selection is hardly likely to surprise as it features several of their singles, a fuller list can be heard on Spotify here. (If you want to hear some more songs plus some music by related acts, and acts that have a clear Talking Heads influence in their sound that can be found on Spotify here).