There may well be large swathes of our readership to whom the name Uli Jon Roth means little , apart from sounding quixotic and vaguely Germanic. Well, to the uninitiated, he was an integral, nay vital component of one of Germany’s most famous heavy rock bands, The Scorpions. He joined them in 1974 and featured on a fistful of guitar based overkill as they rocked their way across Europe, making friends, influencing people and generally deafening ‘metal’ fans, but in a good way. In a relatively short span of years, Uli and The Scorpions recorded four studio albums that cemented their position as Germany’s best metal export. 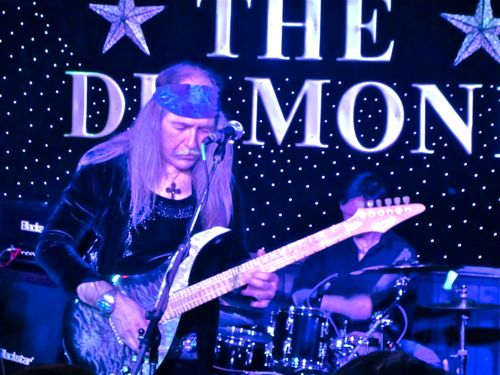 After leaving The Scorpions in 1977 he’s pursued a hugely varied solo career, with a plethora of critically applauded albums, delving into quasi-symphonic territory, blues, heavy psychedelica. Basically if you like Hendrix, Uli will blow your nether regions into orbit. The Hendrix connection has roots, after Jimi’s death, Uli lived with Monika Dannemann, Jimi’s girlfriend at the time of his death. She then had a relationship with  Uli that lasted until 1996 when she was sadly found dead.

The opportunity to check him out at a venue within a guitar strings distance from where I live was not to be passed by. The  small, intimate and friendly The Diamond proves a more than adequate venue to witness a virtuoso performer at ridiculously close quarters. When I say virtuoso I don’t use the word loosely, here is a man so technically proficient that it is mesmerising just to watch the guy play, never mind listening to the extraordinary sounds that eminate from his custom built guitar. Anybody who has ever played air guitar would have been in their element tonight.  He looks frail, he’s kind of small, long hair, moustache, a quiet, softly spoken voice, a bit like a rock n roll mini-Gandalf, but instead of a big magic stick he’s got a guitar.

Opening with a cracking broadside of Dylan’s all along the watchtower which morphed into  two Hendrix numbers, if 6 was 9 and  Little Wing. It was then all systems go for a lengthy set of classic scorpions tunes and self penned material, which had the faithful eating out of his big Gandalf hands. A  version of Enola Gay ( no, not that one!) was a  particular standout. There is something quite wonderful about watching a musician who is so accomplished at his craft that it becomes an almost spiritual occasion, Uli is undoubtedly in this esteemed company. If the opportunity ever arises that you see him playing near you, go see, but hang onto your nether regions.