I’m not going to lie to you. I have to admit to Julian Cope largely passing by off my musical radar. Forgive me, I appear to have been ignoring one of the holiest figures of indie music. Unfortunately, this lost religion seemingly manifests through a self-proclaiming David Icke character. 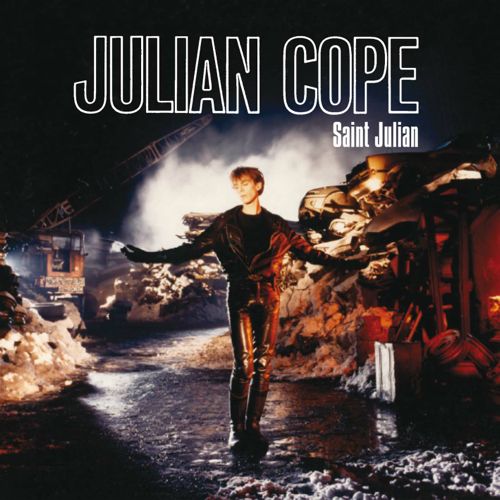 The Saint Julian collection feels bloated. The original material, and Cope’s vocal delivery, is insufferably bland to my ear. These tracks merge into one and I have trouble telling them apart. Even the more electronic flavoured pieces aren’t distinguishable enough from each other, or from music by other more familiar artists. There’s no denying that World Shut Your Mouth remains a great track. But to my mind this alone that isn’t enough to keep this collection of songs together.

The original material on this repackaged and expanded version is supplemented with a couple of note-perfect live versions, and that’s fair enough (but not why I go to gigs). The B-sides are actually quite good, but it’s the remixes I have a problem with. I can’t see what the “Trouble Funk Mix” adds to World Shut Your Mouth. Trampoline is certainly bouncy, with fragrances of A-ha, Bruce Springsteen and a hint even of New Order (admittedly these are the kinds of music I’ve always shied away from). My main problem is with “The Long Mix” of this track – nearly six minutes of my life I won’t get back. It’s just silly. On the plus side, the original version of Eve’s Volcano has a wonderfully Wonderstuffy organ wave and its remix is actually the freshest and most listenable of the lot.

Despite the remixes, CD 2 is better – pleasurable even. It at least shows diversity and I think that it really does go someway to making this release deserve the “deluxe” soubriquet. My favourite track here has to be the hymnal, Disaster, which is an uplifting escape-from-chaos. Maybe it’s the mandolin feel: I do love a bit of electric mandolin. Warwick the Kingmaker is also unique in that it’s spikily ego-rap dirge that hits you square between the eyes largely because it eschews the pop-rock feel of much of the rest of the album. I like its quirkiness. It’s what, say, Jamie T might have been doing if he’d been born 20 years earlier. Finally, the clanging and wailing sound of Non-Alignment Pact (how 80s is that name?), is poppy and punky and sufficiently stand-out to make it a quality tune.

At 24 tracks, there is something in this new version of Saint Julian for a zealous completist Copeite, and perhaps it’s a value-for-money starting place for impressionable initiates in the Copecult. But I am still no convert. It’s certainly rock n’ roll, but I’m not sure I like it. And I’m not alone. According to Wikipedia, Cope has described Saint Julian as ‘not being one of his favourite albums, although he acknowledges that “it has its moments”.’