The Wave Pictures have been playing and performing together for over a decade and it shows. Led by frontman David Tattersall, the band’s relaxed demeanour oozes skill and I can’t help but wonder why they haven’t made the big time yet.

After a slightly puzzling tussle with The Wave Pictures’ PR agency in trying to arrange getting to the gig, the band’s bassist Franic Rozycki ended up doing their job for them and sorted our guest list place himself. 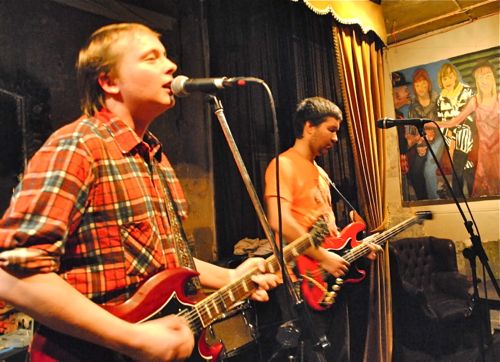 For this latest gig they’d opted for the ramshackle Cable Street Studios in London’s trendy east end where the band introduced material from their forthcoming double album as well as playing older classics.

The former Victorian sweet factory that now is Cable Street Studios has been remoulded into a charming, gritty and romantic performance area, which reflects the style of the band.

The intimate venue allowed fans to get right up close to the boys and see them work their magic, with David Tattersall chatting to the audience between songs. Such was the ease of the front man to engage his audience and hand out witty retorts, you’d be forgiven for mistaking their gig for a comedy night at points.

However, it’s the bands musical talent that really moved the audience. Their refreshingly creative song writing offers a catchy alternative sound, their performance effortlessly moving between foot-tapping upbeat guitar-lead songs and slower hauntingly beautiful melodies that leave you wanting to weep and wonder what experiences could have led to such writing.

A few tracks on the new album, which the band is considering calling City Forgiveness seemed to feel a touch rockier than some of their previous work.

The new double album launches in the autumn and will be their eighth. I’ve no doubt it will grow their small but almost cult following (one woman I spoke to had been to 15 of their gigs) and hope it will bring to The Wave Pictures the true acclaim they deserve. Tour dates for April will soon be confirmed.