The next time you’re stuck outside Stoke-on-Trent in a train going nowhere – but nominally to Manchester – you can thank Flying Teapot. Yes Flying Teapot. For this is one of those seminal early 70s prog rock albums that made a name for Virgin Records, and eventually countless millions for Richard Branson. 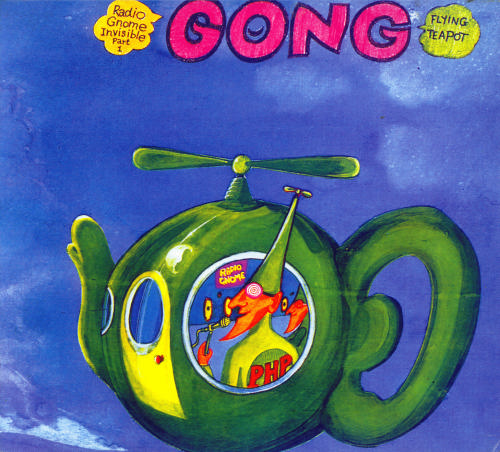 Strange as it may seem, there was once a ‘Canterbury Scene’ and Gong were fundamental to it.  Even more bizarrely, Gong saxophonist Didier Malherbe was first encountered by band members in a cave in Mallorca (although his website is lamentably quiet on the subject).

If you’re thinking Flying Teapot is a silly name for a record, you’d be right. It’s a play on words of ‘flying saucer’. It’s not Shakespeare. But then it doesn’t pretend to be.

Gong’s raison d’etre appears to be surrealist nonsense. Indeed, if it is silliness you want then this LP delivers. As part one of the concept trilogy Radio Gnome Invisible it comprises a barely intelligible meandering narrative. Track one, helpfully also called Radio Gnome Invisible, starts with a whistly wibble and continues with a deliberate Franglais pronounciation of the hook line. Don’t be put off.

This is music that feels freshly silly even today. Although it’s a concept album of sorts, it’s a real antidote to the serious, poutingly sexual musicians of our era (and of their era too). This is funked-up, wigged-out shit replete with dirty basslines. This is from the dawn of prog rock. It is prog rock before it got wanky and self-indulgent (as all great musical genres do – yes, even dubstep). It is truly progressive in the way you might have once believed of the Lib Dems before they got any real power. This is the territory of Zappa or Beefheart. 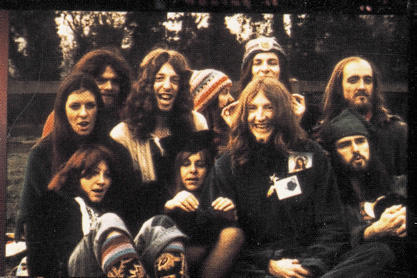 At times, it feels as if it’s Jeff Wayne, inspired not by H.G. Wells, but by the Brothers Grimm. This is particularly true on the track Zero the Hero and the Witch’s Spell. As proto-blogger Piero Scaruffi off-puttingly put it in 1999, Flying Teapot is, ‘a demented collage of nursery-rhyme melodies, circus horns, jazz rhythms, galactic keyboards, sensual/celestial wails, sardonic mantras, mock-heroic electronics, caricatural anthems’.

Track two (of a mere six) – the titular Flying Teapot – is an eleven minute genre-voyage of a song. The length allows an exploration of themes, sounds, influences and musical juxtapositions to keep you on your mental toes. Zero the Hero and the Witch’s Spell is another nine-minute epic that fuses sounds into an essentially jazz drone rock triumph. Malherbe’s sax and flute really come to the fore against Hillage and Allen’s guitar riffs.

Witch’s Song, I Am Your Pussy is essentially The Wicker Man set to music. Vocalist Gilli Smyth gives a witchy shriek of laughter that starts girlish and turns ghoulish. Like a Hammer House Horror version of the chattering cackle of the fly in the Happiness Stan interludes from The Small Faces’ Ogden’s Nut Gone Flake.

It’s important to recognise the ongoing psychadelia of the age that this music came from. And the socio-political statement that this music was making (or perhaps deliberately not making). This is more than simply drop-out/drop-some music. This is an apolitical rejection of anything serious by a descent into fantasy. This is an album to read a Fabulous Furry Freak Brothers comic to. This is a band that appeared at the second Glastonbury in ’71. It is a rejection of the staid and of right-and-proper thinking.

This is not a comedy record though . It will make you laugh. In it, you can spot influences of The Goon Show, Monty Python’s Flying Circus, Derek & Clive. The image of the Flying Teapot is a druggy subversion of a peculiarly British icon in the same vein as these

Of course, the jazz-swing fusion track Pot Head Pixies is the closest thing to a 3-minute pop song that Gong produced. Its lyrics may appear blinkeredly unnuanced today. But it’s not far from the storyland theme and wibbliness of the much-lauded Ogden’s Nut Gone Flake. Just a bit more flakey that’s all. I like to think that A.S. Byatt was listening to Gong when she penned her fairytale-infused Victorian gothic novel The Children’s Book. 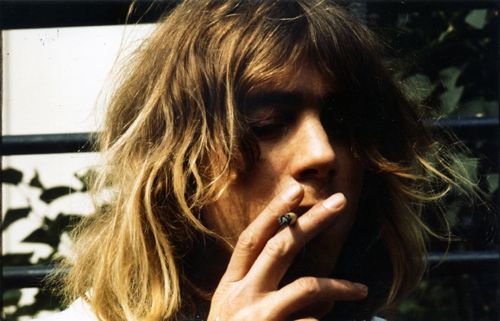 Flying Teapot came hot on the heels of Virginia Plain, which Roxy Music had debuted less than 12 months before. Virgina Plain is a song so sublime and ridiculous that it’s almost impossible to listen to without thinking of the Big Train pastiche. Again, 1973 was the year that The Wicker Man appeared in cinemas. Culture still had the ability to shake people to their cores if they cared to look and listen.

Why you should add Flying Teapot to your collection? It is now 40 years since Flying Teapot was first issued. The Gong generation are now in their 60s and 70s. Yet, the influences of Gong are far-reaching, if rarely acknowledged. Several tracks from the Aphex Twin’s Come to Daddy EP feel ripped from Flying Teapot only with the BPM turned up to the max.

Gong’s sound can be felt down the years to the ambient sound of the early 90s, through to the more experimental line of indie music such as Of Montreal. More overt coverage comes from Gorky’s Zygotic Mynci, whose 1994 track, Kevin Ayres, celebrates the sometime Gong collaborator and Canterbury scene stalwart of the same name, who died earlier this year.

New listeners to Gong’s Flying Teapot may wish for a consistent melody or a consistent feel or a sensible lyric. There are plenty of other artists that can give you less acid-fuelled phonics (although, with Gong, the comedown is mellow and you can always move onto harder stuff later on).