After a two year break from releasing albums Robyn Hitchcock, one of the UK music industry’s most enduring and endearing figures, is back. 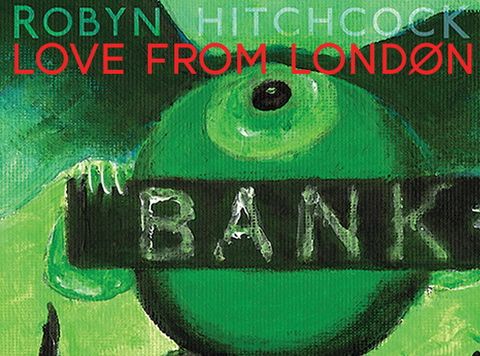 Now signed to Yep Roc Records, his latest album Love From London is overtly political, with references to economic and environmental injustice and centred firmly in his native London; a world away from the Norwegian setting for his last album Tromsø, Kaptein (2011).

As befitting a man whose career has now spanned five decades the production by Paul Noble, is full of sounds from the past; from 1980s synths and the decade’s chorus guitar pedal effects through to a ‘90s Primal Scream pop bombast in places. But the production never sounds completely dated and manages to remain credible thanks mainly to the wonderfully mournful cello of Jenny Adejayan, a rare and welcome sound amid Hitchcock’s style of English pop.

In the PR blurb Hitchcock describes the album as one that “celebrates life in a culture imperilled by economic and environmental collapse.” He adds: “We are surfing on the momentum of chaos. If a consensus on the reality of global warming comes from the people, then the media, the politicians and the corporations will have to adapt to it.”

But its not the environmental themes that are the most striking, instead it is the economic injustice of the people of London and across the UK that stands out. For Hitchcock there is clear anger at how so many can live in poverty while those in the City get richer. This is most prevalent on Fix You, my highlight on the album, which is particularly critical of coalition government attempts to label those out of work and vulnerable as skivers.

Lines on this track like “they make you redundant and blame you for being a slacker while the financial backer is taking a call with a strawberry mousse” are even more striking as it highlights how rare such political song writing is these days. Hitchcock turned 60 this year and the younger generation of songwriters can learn a lot from his controlled anger at the state of the world.

Although Fix You is my highlight, the best segment of the album comes early on with the sad I Often Dream of Trains-style piano ballad Harry’s Song providing a beautiful opening before Hitchcock flexes his pop muscles on the excellent Be Still,  Stupified and I Love You. The album takes a dip in the middle section, particularly on Death & Love and Strawberry Dress, which plod along in comparison to the fine start. But the poignant end section, including Fix You and End of Time soon bring the listener back around.

Love From London may have echoes of the past but with its rare politicised song writing is firmly rooted in the UK of now and shows a veteran performer still very much at the top of this game.