Some things never change. The rich get richer, the poor get poorer, the world gets warmer and human rights continue to get abused. 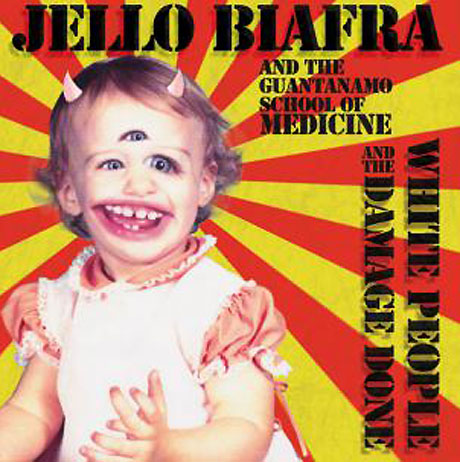 Former Dead Kennedy’s frontman Jello Biafra has been singing and protesting against social, environmental and economic injustices for five decades now and probably will for another five. His mission is as futile as it is magnificent. Even when all is lost and the Werewolves of Wall Street, as he calls them on his latest album White People and the Damage Done, are sitting in their palatial bunker beneath a nuclear ravaged world Biafra will be up top in the ruins, singed, dying and singing his heart out.

This is the second album from his band The Guantanamo School of Medicine and continues his punk take on the Mothers of Invention that has served him well all these years.

Musically this is about as close to a new Dead Kennedy’s album as you can get, with echoes of that great San Francisco punk band’s surf punk on tracks such as  Hollywood Goof Disease.

Lyrically it’s as you were, with the same old injustices getting aired. Old foes like Reagan may have been replaced but there’s still Sarah Palin and the tea party nutters to anger Biafra. The aforementioned Werewolves probably get the most venom, as they continue to feast on the austerity caused from their economic debacle of 2008.

So too does a tabloid media, which he argues on tracks such as Hollywood Goof Disease and John Dillnger is more concerned with petty crooks and celebrities than the real stories of lives being trodden into the dirt by the fat cats.

Even with the serious issues at stake Biafra never fails to treat them with his own sense of dark humour and melodically this is the best he has been since his Dead Kennedy’s days. The title track about US foreign policy is particularly effective at marrying the political with the melodic side to Biafra’s music.

It’s good to hear him again after a break for this old Dead Kennedys fan. Never has the world needed Biafra’s wise words more. Those like me will continue to listen, those like Palin will continue to ignore or deride old punks like Biafra. He carries on, the wheels turn but at least we can bask in the glow of a great new album from the grand old dame of protest singing.

White People and the Damage Done is released on Alternative Tentacles.