To use a popular football cliche, this gig was a game of two halves. The first a bit cautious and unconvincing, the second bordering on wonderful. This wasn’t as a result of the songs chosen at the beginning and the end of the gig, a pretty good range of old and new songs was played throughout, but more to do with the band and the audience (me at least) getting comfortable with the sound. 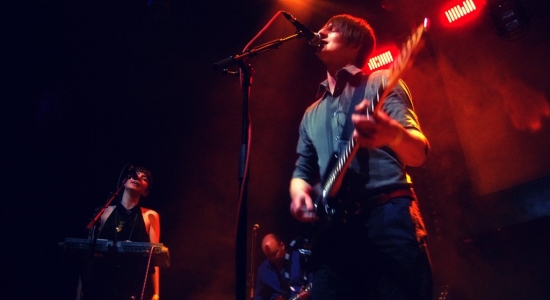 The band commented a couple of times that they were without their usual sound engineer, and couldn’t hear themselves properly. This seemed to take the edge of their performance, even though the quality of the sound seemed pretty good from where I was standing. I had more of an issue getting used to their new arrangements for songs they were playing. Gone, for a lot of the set at least, was the chamber pop sound that marked out their earlier work and gigs, with Will Calderbank’s cello no longer part of the set-up and Mike Siddell often playing guitar, there were no strings at all on several songs. There was also more of a classic pop sound, with electric guitars and keyboard sounds being core to the make-up of the songs being played. Not once did singer Nick Hemming play the banjo, a key part of their early sound.

The slight change in arrangement was hardly a radical shift, and the playing was pretty first rate throughout. However, even though ‘A Matter of Time’, from their debut album, is a great song I did miss the mass ukulele finish from when I’ve seen them play it live before. Conversely their excellent latest single, ‘Fight For Everyone’, sounded pretty. Just as shiny a piece of pop live as on record. 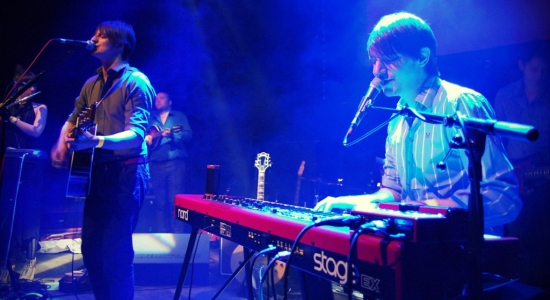 Through the gig the band seemed to get more comfortable, and I was enjoying the songs more and more. In most cases it was the quieter  more introspective sounding songs, that worked best. A case in point was ‘The Sober Scent of Paper’, another from their latest album (reviewed here) and as good as song as the Ivor Novello winning ‘Last of the Melting Snow’ that made the band’s name.

All told this was a pretty good gig, with some great moments shining through. I’m glad that the band doesn’t want to sit still, it would be a shame if they stayed safe with the formula of The Sleeper throughout their career. So even if I’m not 100% convinced of a new arrangement, at least I get to hear the song played differently, I already have the original at home. Regarding the band’s issues with the sound, my advice to them is to roll with it a bit more. They are a very polite group and we’d all enjoy the show more if they worried a little less about sounding perfect. The songs are uniformly excellent, play them with confidence and you’ll not go far wrong.