The Android Angel is Paul Coltofeanu, probably best known to our readers as the man behind panda-bear themed rockers Free Swim. However, in reality it is Free Swim who are the side project, Lie Back and Think of England is actually the third album to be released under The Android Angel moniker. 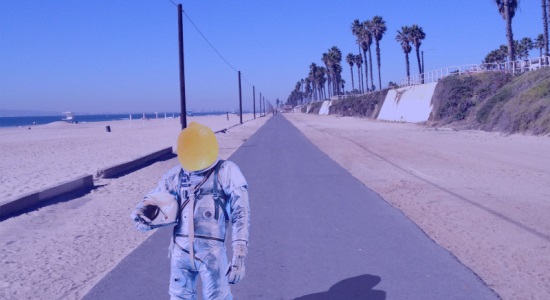 If you are used to his Free Swim work then the able might come as a bit of a shock. The brilliant EPs that he released under that banner tend to be a full-on blast of off-kilter guitar pop, so hearing the atmospheric 23 seconds of opening track ‘Homes’ followed by the gentle acoustic guitars and hushed vocals of ‘Solutions’ is evidence that you are in a different part of Paul Coltofeanu’s musical brain.

To some degree this album can be seen as a logical next step from the forth Free Swim EP, She Dreams In Lights, which already hinted at influences like The Flaming Lips, Super Furry Animals and Sparklehorse in the sound that he was producing. This is a pretty record, full of subtle playing and sweet melodies; beautifully self-produced in in Romania, Ukraine, Hungary, Germany and the UK.

The title track is just lovely, with Sarah Mahony adding some excellent vocals to a duet that is lyrically rather downbeat. Some of the references in the song may date it a little, but they also give the song a place in time that suits the mood.

‘Distant Star’ is even better, a fully formed slice of fuzzy pop that deserves a place on any radio station playlist (and has already featured on Tom Robinson’s 6 Music Show). This is followed by ‘Ability Park’ which is a kind of jazz-folk instrumental that showcases Paul Coltofeanu’s musical skill and mastery of melody pretty perfectly.

One of the things that takes a little time to get used to on listening to this record is adjusting to the less jokey nature of the songs. I’m so used to hearing him sing about growing extra hands or eating a vienetta that a delicate folk song like ‘Foreign Son’ seems at odds with my expectations. This only takes a couple of listens to adjust to though, and it isn’t going to trouble anyone new to The Android Angel who isn’t already a Free Swim devotee.

The only slight criticism I have of Lie Back and Think of England is that the last few tracks seem to break the cohesive nature of the album. ‘Chicago John’ is a fantastic song, I love the instrumentation on the track and it is a lot of fun. It doesn’t seem to quite fit with what has come before though, and sounds much more like a Free Swim track, but it is quite brilliant on its own. Finishing the album with two instrumentals is also little out of kilter with the general flow of the album, although ‘Follow The River’ nicely wraps things back to the opening track.

All told this is about as interesting an album as I expect I’ll hear all year, brilliantly played and written and (despite the influences) like nothing else on record. He’s proved the master of the concept EP with Free Swim and as The Android Angel he has taken it one step further with an extremely impressive album.

You can listen to the album and purchase it on The Android Angel’s Bandcamp page.