The Flaming Lips – is there ever anything bad to be said? True, lead singer Wayne does go on a bit with his Wayne Coyne world philosophy. True, once you’ve seen the confetti cannons, the dancing girls, the Zorb ball and lasers, they perhaps can never have the same impact as the first time you saw them.

But even so, is there anything more uplifting than the sky-soaring refrain of Race for the prize? I don’t think so. The Flaming Lips should be available on prescription to treat world depression, because I haven’t stopped smiling since. 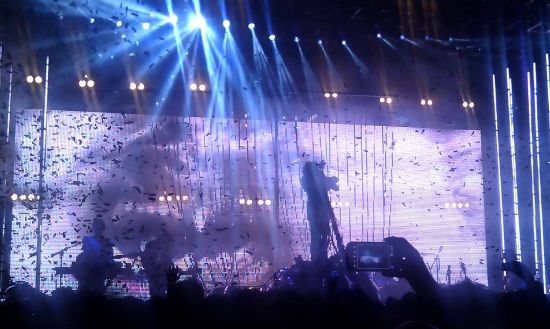 This was my second live Lips experience and it was typically psychedelic, visually stunning, and Wayne’s “too-tight pants” were a spectacle in themselves. No Zorbing or dancing girls this time, but the light-show was outstanding.

However, he did start the night on a somber note before it even got started. During the sound check he acknowledged the cancellation of Monday night’s show (owing to him having a cold), but went on to talk about the tornado tragedy in the band’s native Oklahoma. About imagining knowing that your child was trapped in the rubble. About being aware that everything we were doing by being there last night was a bit ridiculous by comparison. But then, it was important too, these little bits of joy and music being the medium that can carry people through tragedy and troubled times. Ominously, the cannons, when they erupted, shot out not the glittery rainbow we’ve come to expect, but a black confetti instead (still cool).

Because of his cold, it was a raspy, coughing Wayne that took to the stage (and he is generally accepted to be a pretty bad singer anyway). They played quite a lot from the new album, The Terror, including ‘You lust’ and ‘Look…the sun is rising’. With a 30-year back catalogue to draw on, some old favourites included ‘The W.A.N.D’, a de-constructed ‘Race for the prize’, ‘Do you realize??’ ‘All we have is now’ and ‘One more robot/Sympathy’. They’ve also taken to performing Bowie’s ‘Heroes’ live recently, and it was a truly worthy rendition.

There was a nice moment during ‘Do you realize??’ when a coughing, faltering Wayne saw the audience taking over at the top of their lungs, sending the lyrics through the Roundhouse’s rafters. Wayne seemed genuinely touched, and declared that when the time came for the Spielberg-directed biopic, the moment would be recreated and exaggerated for the screen, but we will always be able to say ‘We were there, man!’. Maybe.  We were also to tell everyone that it was the “most important show we’ve ever been to”. Probably not.

That said, I’m a fan and The Flaming Lips never disappoint. Even when Wayne’s is cuddling and kissing a slightly creepy baby doll on stage, I still want to live in a Flaming Lips world where being weird is the goal, the pursuit of happiness is a daily ambition, and everyone deserves a little joy.