After seeing The Flaming Lips earlier in the week, it was nice to come back down to earth for a short while with Australian folk-rock band Cloud Control at Hoxton Bar and Kitchen on Thursday. The four-piece’s short set was a very pleasant way to spend an hour in the always too-busy East London venue. 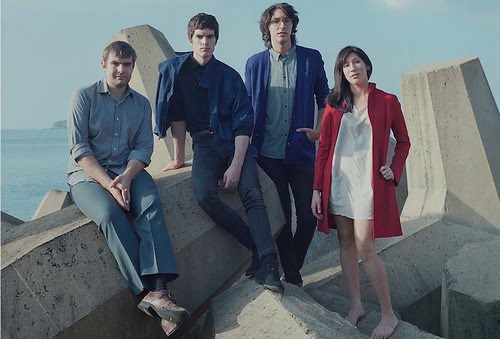 Cloud Control are Alister Wright, Heidi Lenffer, Ulrich Lenffer and Jeremy Kelshaw. They’re from the Blue Mountains west of Sydney, and they have that open, freewheeling sort of sound that I can imagine comes from spending time in the bountiful outdoors.

They’re chirpy and catchy, good musicians and lovely singers. They’ve only released the one album so far, but every second song they played was from an upcoming, almost-ready second album, which sounds like it will be much the same – upbeat and uplifting.

Their 2010 album Bliss Release has some awfully likeable tracks, such as ‘There’s nothing in the water we can’t fight’ and ‘Meditation song #2 (why oh why)’ and ‘This is what I said’. The whooping, hand clapping of ‘Gold Canary’ is a joy, and it had the audience singing and stomping along. They came across as nice and easygoing as their music, and lead singer Wright had an affable, easy interaction with the audience. They seemed genuinely pleased to be there and to have had such a warm response from the crowd, which is always good.

My friends’ criticism was that the band didn’t really know what they wanted to be, not slotting neatly into any discernable pigeon hole. But I think they’re trying a bit of everything they like, which is no bad thing. They also preferred it when Heidi Lenffer took lead vocals, which happens more on the new songs.

They’re a bit like an Aussie Noah and the Whale, with a tad of The Drums thrown in. There’s an element of 1960s psychedelia too, and their harmonies have a Mama and the Papas vibe about them.

A short, but fun and enjoyable gig and I’m looking forward to see what comes of the second album.