It’s only rock n roll but I like it, especially if it’s rock n roll on the warmest day of the year so far, on Cheltenham racecourse surrounded by people old enough to know better wearing pink panther onesies and a sexual health lorry. What more could you want? 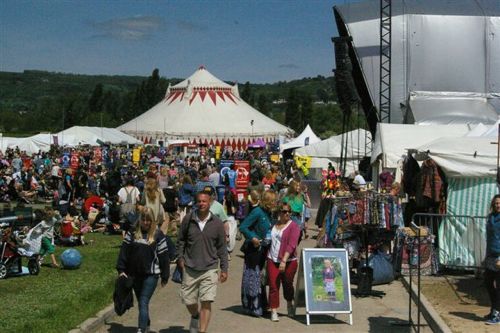 As this reviewer and photographer are past it and have no stamina, we opt for the one day option. It’s Saturday of the Wychwood Festival – here we are now, entertain us.

On arrival priority is given to breakfast/dinner/lunch, with all three combined in one hastily consumed stomach lining meal of rice, nachos, peas, mushroom risotto and chicken before overdosing on sunshine and alcohol.

First up we check out the (still, barely) living legend that is John Otway, who reduced everyone to fits of laughter with renditions of House of the Rising Sun, Blockbuster, his two ‘hit’ singles, Cor Baby That’s Really Free and Beware of the Flowers. If you’re not familiar with this rock n roll failure I suggest you acquaint yourself at the earliest opportunity. Where else can you get gymnastics, comedy guitars, audience participation and a version of The Osmonds’ hit  Crazy Horses on Theremin? 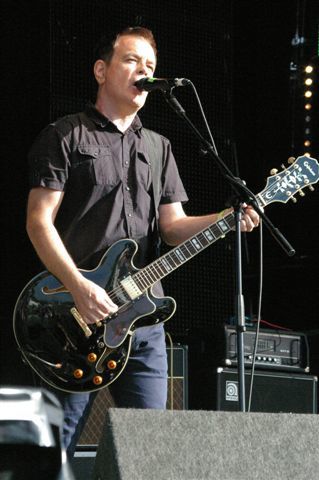 Afterwards I think we saw The Moulettes and then it was time for some abrasive guitar pop from the evergreen The Wedding Present, who blast away the cobwebs with a blistering set. Fantastic.

I hope you’ve all heard the latest Public Service Broadcasting album Inform – Educate, Entertain. Great isn’t it? Well, the eccentric duo, of multi-instrumentalist and Brains from Thunderbirds lookalike J Willgoose Esq, and  drummer Wrigglesworth, were next up. Between them they rocked the house, with Willgoose’s posh electronica knob twiddling among many highlights of their set. 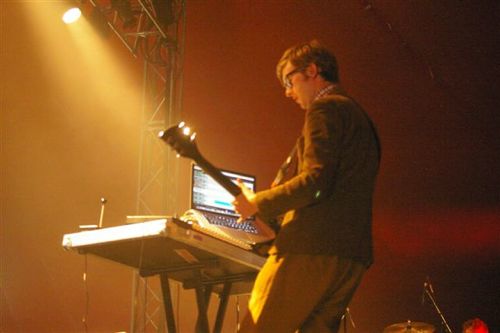 After spending four hours haggling over a psychedelic shirt (he wanted 20 quid, I offered him a very reasonable 15) we gravitated toward the big top marquee for a performance by The History of Apple Pie, perhaps one of the worst band names since Muse. Fear not though, despite their name they were fab, drawing on such reference points as Ride, Spiritualized and Lush as they delivered a great set of loose limbed shoe gaze that took me right back to those heady days of 1992 (excuse me while I put my rose tinted glasses on ). They whipped up a veritable tornado of sonic love. I’m going to e-mail them this week, however, to tell them how crap their name is; I think it’s my duty. 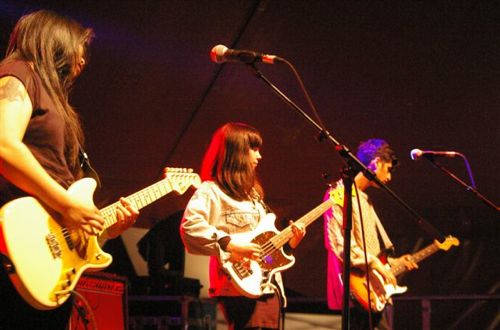 The History of Apple Pie

We then caught the tail end of Caravan Palace, and wish I had seen more of their techno barrage par excellence. It was with some trepidation that I waited for Saturday’s headliners, 1980s new romantic pop sensations and Sheffield’s finest, The Human League. I anticipated three numbers and buggering off to see someone else. Well, in the same way that I had to swallow my opinionated cobblers last year and finally concede that Dexy’s Midnight Runners appearance at the Greenman festival was bloody incredible, I have to admit that The Human League were totally ace. It was Kraftwerk on a budget, it was cheese, but the finest cheese you’ve ever tasted and it was fun with a capital F. Mirror Man, Love Action, Fascination are such great big pop singles, with Lebanon, Wonderful, Wonderful, and their crowning glory, Don’t you want me? all shone brightly tonight. They even did their first single Being Boiled, which was greedily fed upon by a joyous crowd, dancing badly on a rare warm English summers evening. It was the epitome of a festival ‘moment’ with respect to Phil Oakey and the girls. 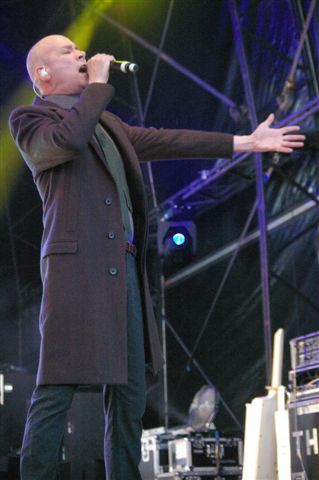 Afterwards we went backstage to collar Mr Oakey but sadly he couldn’t be found. I think perhaps he spotted me with my clipboard and sexual health questionnaire.

On Sunday morning when I woke up I had in my bag eight packets of pansy seeds, a pair of pink oven gloves, (unused), two country music cds, four bottles of environmentally friendly washing up liquid and a clipboard.