This was a night of powerful front women at Bristol’s Louisiana with the inimitable Marnie Stern headlining and support by other female-fronted acts Sky Larkin and The Hysterical Injury. 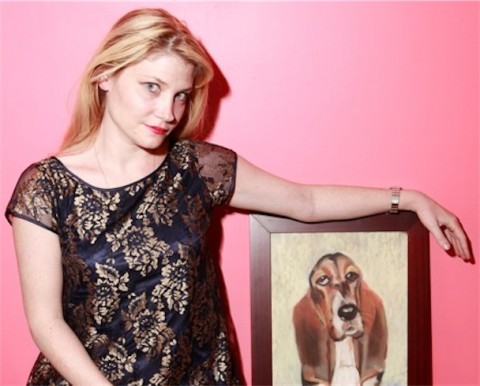 Although guest list problems, which thankfully were resolved, meant my enjoyment of Bristol’s The Hysterical Injury was cut short, they delivered a pummelling performance of charged guitars, screams of feedback and stacked drum beats that went down well. The final song ended with a long, trippy breakdown that had the ambling ambience of The Velvet Underground. All quite impressive for this siblling two-piece, of bassist and vocalist Annie Gardiner and her brother Tom, on drums.

Sky Larkin‘s Katie Harkin has a strong but kooky vocal, underscored by the band’s bittersweet chord sequences. Opener ‘Still Windows’ introduced a battering ram of a sound and these power chords were basked in waves of reverb. The synthy sound of the guitars brings to mind New Order. They’re also a bit Smashing Pumpkins but do have an original sound and integrated new songs from the forthcoming album into the set tonight, as well as an X-Ray Spex cover.

Marnie Stern then arrived on stage and takes the first of several swigs from a bottle of wine. It was a ramshackle entrance but the quality of the playing and the passion of the performance more than made amends during the next half an hour. She is famed as one of the great modern guitarists with her trademark pacy finger-tapping of the fretboard. Her guitar actually did allsorts during the gig and it’s lead was matched simultaneously by all manner of vocal improvisation. ‘You Don’t Turn Down’ introduced a more epic, cosmic guitar sound. Elsewhere, the freeform compositions suggested Pixies as she also maintained the guitar jangle of Television and the sound of her native New York.

Marnie absolutely rocked. She played with a smile on her face and her skipping and pogoing was mirrored by the first rows of the audience. The best was left until last with the insistent, scrawled riff of ‘East Side Glory’ which then gives centrestage to Oneida drummer Kid Millions; whose playing had been an evening highlight. And so closed a highly original night, made for music lovers.