A Little Orchestra’s debut album Clocks manages to both confirm and surprise expectations in one go.

Formed a couple of years back and still led by Monster Bobby of The Pipettes, its four violins, viola, cello, flute, clarinet, and bassoon, make it quite literally an orchestra of diminutive dimension. 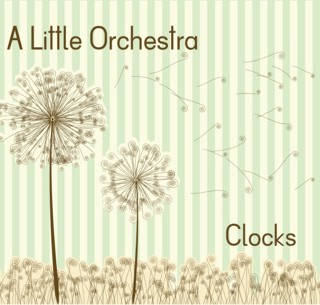 Published on Vollwert Records, Clocks follows EP Josefina, released April 2013 on Elefant, and features such a list of guest vocalists as to ensure that its train of wistful, nostalgic, anglo-indie-phile songs roll through your speakers like carnival floats in a northern town.

The album’s 11 tracks feature collaborations with Haiku Salut, Gordon McIntyre (Ballboy), Lisa Bouvier (The Proctors), and Darren Hayman, peppered with modulations on its eponymous Clocks ‘theme’ which shows off its orchestral heart.

Stand out tracks? Difficult to nail down. Certainly ‘Treacle, you should probably go to sleep’ (with Simon Love, from The Loves) has a great hook, beautiful swathes of cinematic strings and is the most unlike any of its sibling tracks. The stunning vocals of ‘Josefina’ (with Model Village) and ‘East Coast’, a moribund tale featuring McIntyre’s deadpan delivery are other highlights.

If you find yourself on a sun-blighted beach in foreign climes and need to be transported back even temporarily to the ordinary everyman’s England for 40 minutes or so, this is the medicine.