Disclaimer: this is less a review, more a love letter to The National. They’re one of my most favourite bands ever. They’ve been a big part of my life these past few years, a soundtrack on repeat as I’ve travelled about London and beyond.

So I was glad to spend an hour and a half trying to get tickets when the surprise gig at Roundhouse was announced a couple of weeks ago, so I could see them live for the first time.

Such a cliché, but it was everything I hoped it would be. There’s nothing like being in a crowd of people who absolutely adore the act they’re seeing, and that was definitely the case last night. A tightly controlled ticketing system limiting buyers to two ticket vouchers only, which were to be exchanged for wrist bands with photo ID at the box office meant that the sold-out gig was tighter to get into than Miles Kane’s trousers, but also meant die-hard fans had their day and touts were left high and dry. 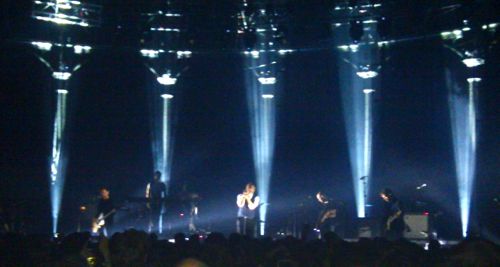 The Brooklyn-based band performed for a solid two hours, playing heavily from the magnificent new album Trouble will find me ,  as well as dropping gems from their back catalogue, like Fake Empire, Squalor Victoria and Apartment Story from Boxer as well as Secret Meeting, Abel and Mr November from Alligator. It was 2010’s High Violet that gave them their biggest success before this new album, and they played Terrible Love, Conversation 16, and of course, England from that, among others. But the real highlight for me? I have been waiting to see them do Bloodbuzz Ohio live for a long time, and it was just spectacular – driven, emotional, epic.

Before they started I was chatting to the guy next to me who said the new album was one of two halves – the first half being ‘the singles’, which he preferred. I think he has a point, but I think the more I’ve listened to it, the more I’ve liked the latter half, and Pink Rabbits, done so beautifully last night, is fast becoming one of my favourite tracks. As is Humiliation. But Sea of love and Graceless were phenomenal, as was Don’t swallow the cap, I Should Live in Salt and first single, Demons.

I am rapturous, I know, but why do I love them so much? It’s the introspective, intensely felt lyrics and Matt Berninger’s unbelievable, extraordinary voice that’s capable of great, deep baritone sensitivity and screaming heights. It’s also the raw, what I like to call ‘man emotions’, that come through in the songs, the fantastic metaphors and imagery (‘I was just soaking my head to unrattle my brain’), the below the surface anxieties, worries and fears layered over the wonderful, interesting phrasing and arrangements. Then there’s Bryan Devendorf on the drums. He is so good. Listen to Brainy from Boxer to know what I’m talking about.

The lighting was superb too, and I swear there wasn’t a dry eye in the house when Berninger got down into crowd to lead a music-free singalong to Vanderlyle Cry Baby as the final song of the night. It lifted the roof of the Roundhouse.