The heavens may have opened on Thursday to create what has become ‘typical Glastonbury weather’, but thankfully that looks like it for the rain. The weather, a major preoccupation among those attending Glastonbury, looks perfect for the rest of the weekend and Friday was no exception. 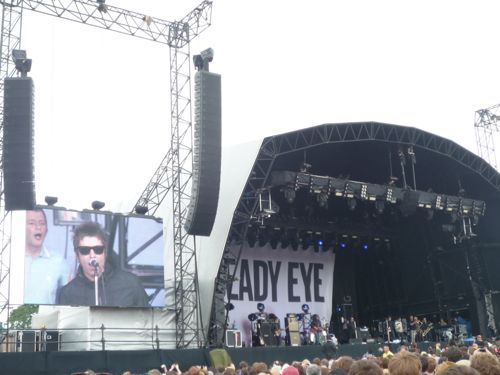 After cycling in on the Friday morning I decided to take a wander over to the Other Stage, the festival’s second major stage and wonder why the devil it was so packed at 11am. Within minutes, bandy legged and sun glassed on stepped Liam Gallagher and I realised I was in for a surprise Beady Eye gig. Now at this point it is usual music journalist practice to be all prissy and declare anything Liam or his brother Noel do as boring and tired old rock. To my surprise though I didn’t completely hate their set, with its horns and synths fleshing out the clear lack of any quality songwriting. Liam, for all his faults has undeniable attitude and their cover of Oasis’ Rock n Roll star was pretty good.

Over to the BBC Introducing stage next for something that’s more our cup of tea, Brighton band Milk and Biscuits. This septet, with flute and trumpet, play joyous, simple indie pop that Magnetic Fields fans will love. An album is due out this year and we’ll definitely try and get a copy to review. Really promising new band. 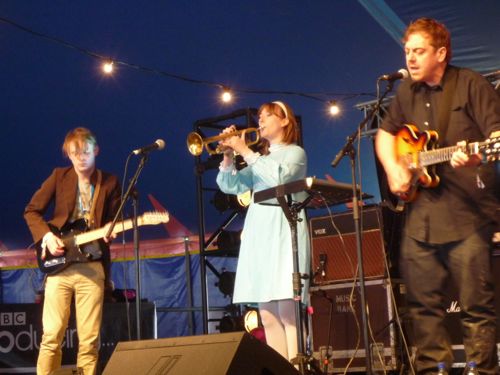 Kodaline, at the John Peel stage, provided one of the unintentional highlights of the night. The Irish epic indie rock act, think Keane in skinny jeans, had volume problems with the vocals. Cue the biggest heckle I’ve ever seen at Glastonbury as thousands of people point to the sky and shout up a  “up, up.” Like a footballer who scores only to realises moments later that he was off side and its been disallowed the band slowly realised that the fingers waving in the air where instructional to the sound man not a show of praise. They left in a huff and returned minutes later apologetic. Sadly though the volume didn’t help. Still sounded like Keane, so I left.

Over at the BBC Introducing there was another comedy moment.  The surprise guest at 3pm turned out to be hip-hop-lite duo Rizzle Kicks, introducing by Nick ‘grim’ Grimshaw. Those under 17 were enraptured, those over left. Their backing band were pretty nifty though. 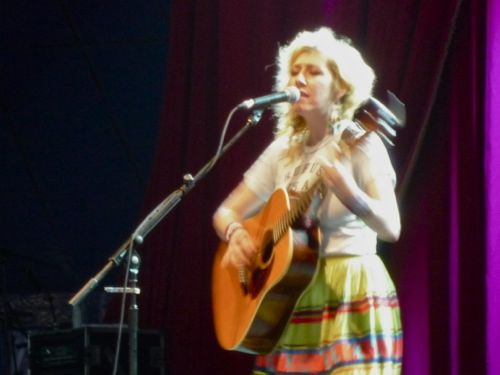 As the afternoon passed into evening, more wondering took place taking in a heart-warming set from Billy Bragg, together with Martyn Joseph and other artists  taking part in one of his round up sessions at The Leftfield Tent. The Spirit of 71 for a reggae DJ set by Don Letts and enjoyed by Harry Enfield and some tall pantomime dames on stilts was another strange place I ended up.

The acoustic tent was next for a breathtaking set from Martha Wainwright, full of light hearted tales of family angst and a voice and guitar playing like an orchestra that filled this friendly venue with tracks such as Factory and Four Black Sheep. 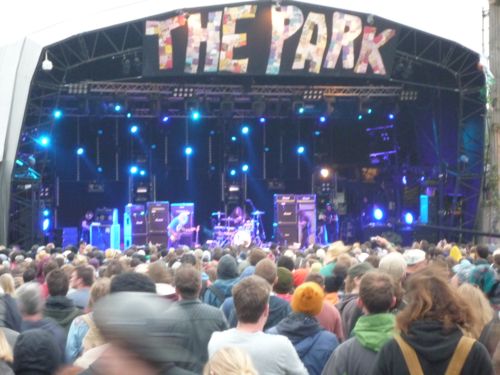 The evening over at the Park was sensational for this aged indie kid. Dinosaur Jr put on a stellar festival set, playing all their hits as Freak Scene, Just Like Heaven and The Wagon. Django Django also know how to wow a festival crowd, leaping on stage in matching white and black zig zag shirts their hour set formed mainly of tracks such as Storm and Wor from their self tilted debut album were sensational. Geeks, who know how to blend dance music and guitar pop well, come round rarely and should be cherished.

Final act of the night for me was Portishead at the Other Stage. All those tracks  from Dummy eased out of this band as if the last 20 years or so had never happened with Beth Gibbons remarkable voice captivating the crowd. It has been a great, eclectic festival so far. Looking forward to the next two days.