Nick Cave and the Bad Seeds not only own the Pyramid stage after tonight’s performance, they may very well now own the accolade of this year’s best set at the whole event. Resplendent in silk black suit and paisley shirt Cave provided a master class in how to perform at a festival. Each soft moment perfectly placed among the dangerous, violent lyrics and tales of murder that Cave has excelled at throughout his career. A newish song, the brooding epic Jubilee Street, is already a live favourite, as were older classics such as Mercy Seat and a spellbinding encore of Red Right Hand.

It was an incredible set, but earlier that day there’d been a few acts that came pretty close. First Aid Kit, first up on the Pyramid stage, were sublime. The two sisters from Sweden are emerging as a  renowned global festival act and deserved their main stage slot. While the sing along to Emmy Lou got few takers by the end the crowd were visibly impressed by the more upbeat King of the World and their stellar version of Simon and Garfunkel’s America. 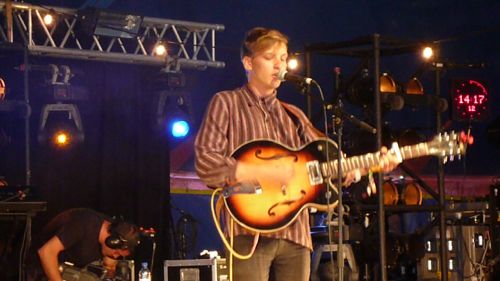 The nature of Glastonbury, with its vastness and more than 100 stages, is to find yourself both spoilt for choice and in need of a nice sit down occasionally. I opted to spend the afternoon near to the John Peel, BBC Introducing and Gully stages, all within close proximity of each other and offering ample sit down space. First act I caught was one of my highlights of the day – Bristol singer George Ezra. Young, with just a guitar, his voice is something to behold, deep and quite frankly stunning. He’s got an edge too, that puts him little bit more in the Tallest Man on Earth camp than say Ed Sheeran.

Next on the BBC Introducing was a special surprise guest. Last time I was wooed with such a promise I was cruelly let down when the Rizzle Kicks took the stage. This time it was a far more impressive guest, none other than The Other Stage headliners The XX. Their set was brief but I almost by the end got why there’s so much hype about them. Well, almost.

Psychedelic folksters Villagers, the project of singer songwriter Conor J. O’Brien, over at John Peel, are one of those bands that have passed me by in recent years. On this evidence I’ll be looking at them more closely. Great set, with O’Brien proving a captivating and precise singer.

The XX at BBC Introducing

West Papua’s struggle against human rights abuses is one of the world’s ills that I only found out about today thanks to Melbourne reggae/funk act Blue King Brown, whose members are from this Indonesian province and at one point were joined on stage by West Papua independence leader Benny Wenda. Sitting in the sun, beer in hand, listening to this superb band and being educated was just about as perfect as a perfect Glastonbury moment can be. 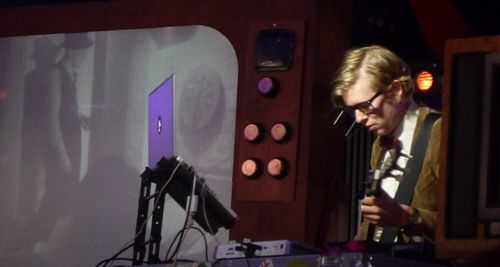 Before Nick Cave I popped over to William’s Green, a smallish tent venue, to see one of the most fun acts I’ve seen  – Public Service Broadcasting, aka J. Willgoose, Esq on keyboards, banjo and guitar and Wrigglesworth on drums. Flanked by a giant old TV they essentially mash up public service broadcasts with awesome prog rock and electronica. It’s a devilishly simple combination made better live by Willgoose using public service broadcast samples for stage banter with excellent effect.

Unlike all those acts I saw today,  Mumford and Sons had to follow Nick Cave. I didn’t wait around to find out how their brand of bland folk rock fared.