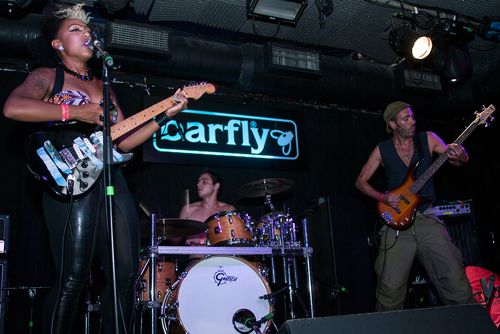 The 30 degree heat in a stifling room with no ventilation had diminished the venue’s standard bustling crowd. The trio also performed between two groups that would have been more at home on a Saturday night TV talent show, hosted by a panel of plastic-faced celebrities. In addition, technical problems hit for the final two songs of the set, leaving the band’s front-woman Matilda with a microphone that cut out intermittently, something that visibly (and understandingly) annoyed her.

Unperturbed, Matildaz really kicked it on stage. Matilda belts out powerful vocals, dominating and squeezing the soul out of her material, which switches between a funk-like punk and an angrier tribal sound.

I was lucky to spot this edgy group play briefly at a private party earlier in the summer and I pledged I’d follow them to their next gig. And this was it.

Matilda founded the band with bassist ‘Jackson’ and drummer ‘Lorenzo’ last year and they’ve an excellent selection of early material, most of it bass-led. Band influences are cited as Odetta, Nina Simone, Bjork, Radiohead, Joy Division and Led Zepplin although Matildaz have created a unique sound of their own, apparent through their six-strong set and two encores.

Matildaz sounds, sings, dances and looks the part. Like Tina Turner with extra bite. I can already imagine her talking to camera in a documentary about how life was before the big-time, playing gigs such as these.

The trio hope to release the third track on their songlist (My Karma) later this year and have just completed a mini-circuit of festivals including Green Man and Wilderness. I’m extremely excited about this band’s new work. A must-watch for the future.

1. Journey to the Jewel.

6. Funkier than a mosquito’s Tweeter.