Festival No6, one of the last of the UK’s summer festivals, takes  place in the fantasy village of Portmeirion, North Wales; a unique setting made famous as the location for 1960s Cult TV  series The Prisoner. But this relatively new festival doesn’t just rely on its incredible location, where bands play in and around he village’s various odd buildings,  the line up is also one of the most impressive of the year, mixing well known artists with emerging talent. 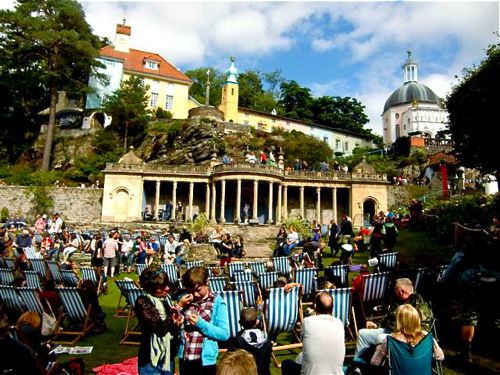 First Band I managed to catch on the Friday, after putting the tent up at an angle on the side of a hill, was Mary Epworth, whose band was full of energy as she switched between guitar and percussion. Among the highlights from her set was the final song, The Four Horsemen originally by cult  1970s Greek prog band Aphrodite’s Child.

A quick climb up some spiral steps to the smaller  stage at Tim Peak’s Diner was rewarded with a  fine, psychedelic set from Hot Vestry, who looked like they were on one of those pop programmes from the Sixties with the band on multi levels. Time to wander over to see who was on next in the village. 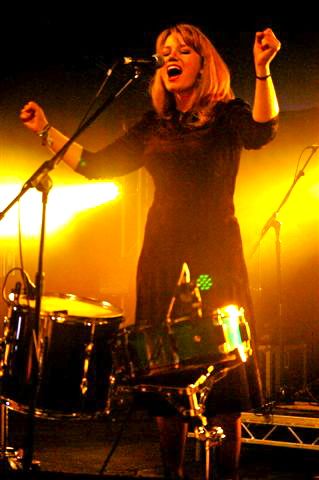 At the town hall stage Cathal Mo Chroi had an intriguing name. Turns out it was none other than Madness’s Chas Smith under a new stage name. He sang some very personal songs accompanied by the No6  twelve piece ensemble. This was such a moving performance and Chas was was very nervous as this was the first time he’d played with the band. So glad I stumbled across this performance as it was one of those magical festival moments that catches you by surprise.

Next I went for a stroll into the forest and came across The Travelling Band playing on ‘The Lost in the woods stage. This proved the perfect setting for this hardworking, happy-hippy band. Next up on this stage was Badly Drawn Boy who’d played the main stage earlier on in the day but this was a much more intimate setting amongst the trees. If you wandered deeper into the forest they had secret raves and bars fabulously decorated. 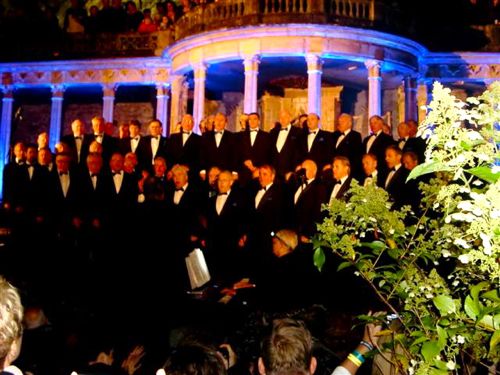 Meanwhile back at the Central Piaza stage I caught Stuart Maconie  doing a stand up routine as a warm up for the entrance of The Brythonthiaid Male voice choir. There was a massive crowd consisting of young and old. The Choir start off with some more traditional songs as well as the Corneto advert music and  ‘You’ll never walk alone’ before moving on to cover ‘Good times’ by Chic, then ‘Design for life ‘ By The Manic Street Preachers’ finishing off with a rousing version of ‘Uprising’ by Muse. The Crowd absolutely loved it, cheering for more. I caught the tail end of James Blake at the main stage to bring the first day of the festival to a close. 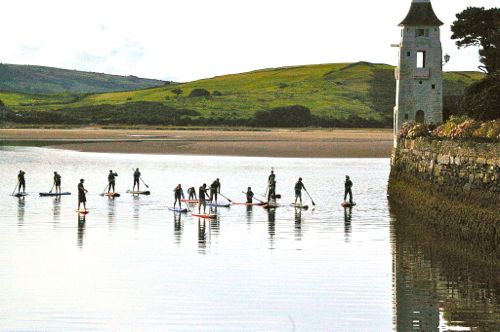 Saturday morning and it was time to have a walk down to the estuary to see the boarding activities, which was part of the festival. An amazing sight to see them sail past. Back at  a packed Tim Peak’s Diner Tim Burgess of The Charlatans billed as ‘Storytime with Tim’ was taking a Q & A session and proving to be one of the music industry’s Mr nice guys. What a thoroughly nice bloke he is.

The event also showcases new cinema at the Heavenly Cinema in the village and  I managed to catch a pre premier screening of  ‘Basically Johnny Moped’ about the forgotten punk band of  the seventies Johnny Moped, which boasted  Chrissie Hynde and Captain Sensible as former members. 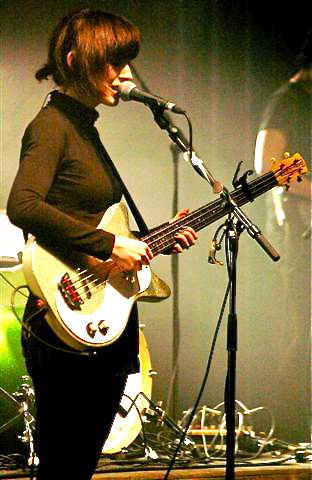 Up at the main stage Daughter performed a magical and confident set in front of a large crowd and were my highlight of the weekend. They played with confidence and sounded so good. Probably the best band of the weekend.

Later on in the evening trip hop legend Tricky took to the  main stage for a tense fraught set, in which his attempts to get members of the crowd on stage were thwarted by stage security. He was eventually unplugged after just five songs, but not before he played a storming version of ‘Ace of Spades’ by Motorhead. 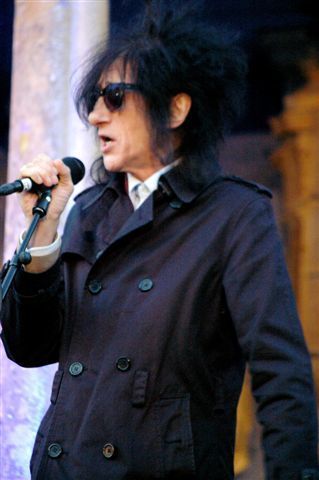 Next up on the Central Piaza stage was a trio of poets starting off with Kermit (Black Grape) – The man with the comb in his hair. You could see that the crowd was growing as they jostled for the best view points. Mike Carry was next for tales of about Manchester, Death and the late Anthony Wilson, superbly backed with music from the Festival No6 string ensemble. The main man arrived next, John Cooper Clarke -The bard of Manchester. I first saw John in a punk club back in the late seventies. Since then he’s become a British institution and his popularity continues to grow with the young audience. At certain points he gets parents to cover their children’s ears because it is still pre watershed. We’re treated to Hire Car, Beasley Street and other classics. He finishes off the set with ‘Chicken Town’ which was featured in an episode of The Sopranos. It boosted the cash in his swear box…..long may he reign. 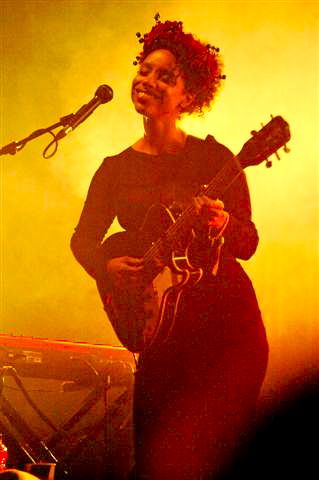 Quick walk up to the Big Top to see Lianne Le Havas who starts the set off on her own with just guitar and her sweet, soulful voice, before being joined by her full band. She was another of many highlights at this festival.

Watching Saturday’s headliners My Bloody Valentine, who’ve  been lying low for a few years, was like having your molars removed with no anaesthetic with a bulldozer driving through your brain backwards. It was an attack on the senses. Should have seen it coming when they wheeled in the biggest bank of amps and speakers ever seen. They created such a powerful wall of sound, which eventually drew me to the point of enjoyment once I got past the pain barrier. I think I enjoyed it. 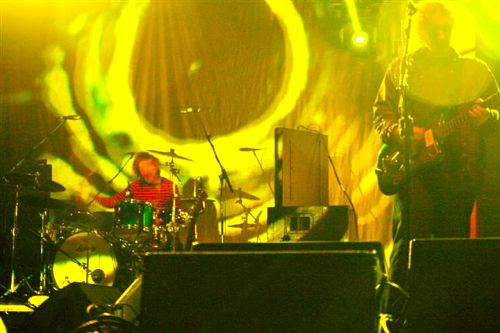 On Sunday, the predicted bad weather arrived as campers were told to batten down their tents. The organisers had to close the main arena including the wood stages and a number of acts had to be cancelled due to the high winds and rain. It didn’t look good so many people decided to leave. But for those that braved it, normal service was resumed in the late afternoon as Johnny Marr played a fab set finishing off with a couple of Smiths songs he co-wrote. Chic had the crowd singing along to all the hits that Nile Rodgers has written for other people including Madonna and David Bowie. Also on this rainy Sunday Wales’ Manic Street Preachers, who’ve just released their eleventh album, reached out to young and old playing most of their hits in front of a packed tent.

It’s goodbye to No6 at Portmeirion, a truly magical festival, for another year. Looking forward to 2014 already.

Words and pictures by Arthur Hughes