Travel broadens the mind, as the old adage dictates, and for those of artistic bent, it can also broaden the parameters of inspiration and result in a surge of profligate creativity. And so it was with The Wave Pictures’ David Tattersall who, after the band’s six week road trip touring the USA with Allo Darlin’ last year, wrote at least twenty songs in a “very jet-lagged and confused week.”

With clearly enough songs to justify this double album,  City Forgiveness is a testament to how experience garnered through peripatetic existence can excite the imagination while also highlighting the ‘patchiness’ that inevitably occurs when dealing with the concept of a double album.

The crunchy riff that introduces opening track ‘All My Friends’ is the first hint at a departure to a more blues rock sound but the words “Once I dreamed I saw your face on a carton of milk/Once I dreamed I spilt the milk all down my shirt” are a familiar reminder as to the quirky Morrissey-esque absurdities of Tattersall’s lyricism.

Following track ‘For This Day,’ heralded in with a melodically bouncy guitar riff reminiscent of Paul Simon’s ‘You Can Call Me Al,’ is a gorgeously wistful opus to the past and a highlight of Tattersall’s song-writing canon thus far; using his oft trusted predilection for minutiae (“Mum holds the ladder with a slippered foot”) and the recalling of his first conscious memory of running through “grass that has grown high above my head,” he captures a touchingly nostalgic ideal of childhood and early family life.

‘Missoula’ with its jaunty three chord shuffle is a pleasingly catchy two minutes of indie pop and, though it sounds as if the multiple declarations of ‘I Love You’ are aimed at the titular city in the US State of Montana, it captures the band in romantic mood. This outlook of romance is continued in the soothing ‘Whisky Bay.’ With its tiki style guitar and mellow rhythms, the music conjures up images of palm trees and tropical paradise while the lyrics “I love you more with each passing year,” are thematically redolent of Elvis Presley’s ‘Ku’uipo’ from Blue Hawaii.

While the slightly ominous minor chord strum of ‘Better To Have Loved’ places the listener on familiar terrain (it sounds similar to past Wave Pictures songs such as ‘Leave The Scene Behind’), the album has a myriad of blues rock grooves that sometimes feel as if they exist solely as a vehicle to showcase Tattersall’s considerable guitar playing talents. ‘Lisbon’ is at least as dense with guitar soloing as it is lyrics and drummer Jonny Helm and bassist Franic Rozycki lay down solid bluesy rhythms on ‘Chestnut’ and the more subdued ‘Yellow Roses’ to back Tattersall’s playing; by the time we get to ‘The Ropes’ it feels perhaps as if he is noodling for noodlings sake and, despite his undoubted skill as a guitarist, one wonders as to whether this style of music is conducive to bringing out the best in a group like The Wave Pictures. 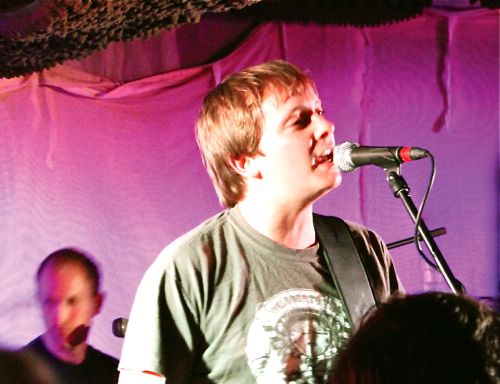 The album is unsurprisingly full of Tattersall’s usual linguistic whimsy, (the absurdity reaches its zenith in ‘Golden Syrup’- “I’m waiting for someone to take a bite out of my neck/I have become a nervous wreck/The furniture is made of liquorice like the little hairs growing on my arm) but he is at his best when under the employ of touching sentimentality; ‘Red Cloud Road (Part 2),’contains the sweet lyrical gesture of “Face it, if I had an aeroplane I would fly through the sky/I would write your name in mile high letters to better the blue sky with the mention of your presence.”

Final track ‘Like Smoke’ paints a bleak picture of a family funeral and the death of a grandfather but its pretty chorus and tasteful guitar chops make for a strong end to the album. The suggestion that “We will rise above the city like smoke,” is an perhaps an allusion to a destiny we all share and it manages to bring both a maudlin but strangely uplifting conclusion to this 19 song record.

City Forgiveness, while containing some of The Wave Pictures best songs, perhaps suffers from the inexorable challenge for consistency that any double album venture will entail. The nature of any 90 minute album will decree that, particularly in the digital age, listeners will pick and choose their favourite tracks and leave a considerable chunk of the others without attention. The Wave Pictures deserve kudos for trying though and, let’s face it, with The White Album, even popular music’s most prestigious songwriters couldn’t avoid the infernal dilemma of double album ‘patchiness.’