Anyone whose uber-unique life has taken in everything from homelessness, UFO sightings, hiding from the US government (her partner was a military draft evader in the 1960s) and 30 years of building up cult status as a winged helmet wearing busker through her tenures in Boston in the 1980s and the gay district of San Francisco throughout the 1990s, could only really be capable of producing idiosyncratic art such as this.

Somewhat humorously titled ‘Greatest Hits,’ this collection of songs, originally self-released in 1990 on hand-made cassette, is a recorded document of The Space Lady’s life on the streets, storefronts and subways of America. 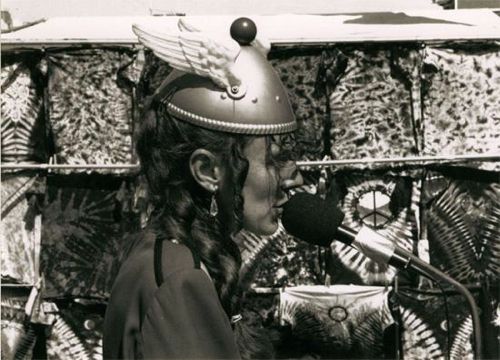 Her set up is rather simple: a battery powered Casio keyboard, vocal microphone and echo and phaser controls, all of which provide the peculiar shapes and trippy intergalactic sounds that uniquely interpret what are mostly cover versions of classic rock and pop tunes.

Original track ‘Humdinger,’ is a charming opener to the album with an accessible melody and a lyrical nod to her beloved ‘souped-up Casio’ which provides her ultra-distinctive sound. Another self-penned tune ‘Synthesise Me’ follows; it’s a rather more haphazard melody and the lyrics “I’ve seen the rings of Saturn in the craters on the moon” and “Oceans of Venus in the middle of June,” showcase a spacy peculiarity that match the odd phasing swirls and spindly synth lines of the music.

Her version of Peter Schilling’s ‘Major Tom,’ previously appearing alongside the likes of Daniel Johnston on Irwin Chusid’s outsider collection ‘Songs In The Key of Z,’ sees the Casio at perhaps its most haunting; the frantic restlessness of the eerie synthesised sounds in some of the verses seem to provide a spooky evocation of some lost computer game from the 80s and, for someone of my generation at least, a haunting nod to childhood.

‘Ghost Riders In The Sky,’ a classic covered by everyone from Elvis and Johnny Cash to Buckethead, is a key example of how the term ‘cover’ can only be used loosely in regards to The Space Lady; her offbeat delivery assuring that connotations of cowboys, horses and Westerns are replaced by visions of the outer reaches of the cosmos.

The 35-40 second outro of weird phaser effects to The Steve Miller Band’s ‘Fly Like An Eagle,’ further highlight the quirkiness of the album and serve as an apposite prelude to what is a rather bizarre interpretation of Steppenwolf’s ‘Born To Be Wild.’

By the time we get to The Sweet’s ‘Ballroom Blitz,’ one has perhaps grown wearied of the one dimensional sound and a stark idiosyncrasy that has started to become cloying. It is possibly The Space Lady’s least successful cover and the song is robbed of its swagger and melodic urgency.

The most interesting thing about Dietrich is the story of her life and the path that has led us to this release. The spectacle of street-dwelling eccentric, happily delivering tunes to strangers is one that puts a smile on my face. However, as a pure, home listening experience, the appeal of ‘Greatest Hits’ is not quite as strong. After a long hiatus to look after her elderly parents, The Space Lady has once again taken to the streets in her native Colorado. Rather than a recording artist, this is how I prefer to think of her: of adorning the winged helmet once more and keeping her romantic tale alive.