Public Service Broadcasting offer one of the more remarkable and novel live experiences, blending samples of wartime public information films and accompanying visuals with a surging rock backing. It is brilliantly effective, making one wonder why such an approach hasn’t been utilised to such an extent before. The duo comprises Wrigglesworth on drums (pictured left) and J Willgoose (pictured right) on, as he describes it, ‘everything else’, which tonight means banjo, guitar, sampler and other electronic instruments. 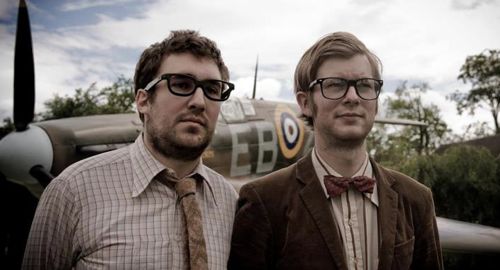 The band is the brainchild of J Willgoose, who is something of a virtuoso, being able to play keyboard backing while also laying down a guitar riff with one hand and hitting sample tabs at the same time. The band has been allowed unparalleled access to the British Film Institute’s archives, delving into old footage and propaganda material to lay down the basis of their tracks.

With its mission statement of  ‘teach the lessons of the past through the music of the future’, the band start in titillating fashion by warning against the threat of mobile phone recordings at gigs, something the crowd audibly appreciates. First up is London Can Take It, sampling a 1940s Ministry of Information film covering the Blitz. PSB deal heavily in nostalgia, with If War Should Come featuring uplifting messages about impending tussles with the Jerries.

The Now Generation is based on old fashion shoots, including clipped tones promoting skirts with pleats, backed with a furious tempo and a taut guitar riff. At one point the narrator points out the ‘new fashion to look old fashioned’, a phrase rendered particularly resonant by J Willgoose’s outfit, all hipster retro-geek with tweed jacket and bow tie.

The stand-out tracks of the night are Spitfire, a rock-out tribute to the famed Battle of Britain machines, the more electronic ROYGBIV featuring J Willgoose on Banjo, and Everest, charting climbers Hillary and Tenzing as they ‘carve steps into the roof of the world’. At their best Public Service Broadcasting are brilliantly thrilling and haunting at the same time, leaving the mainly young crowd wondering how they can feel so nostalgic for a period of history in which they never existed.

If there is one drawback to the band (or is it more of a ‘concept’ than a band?), then it lies in what on earth they will go on to do next. Two new tracks, both based on ice skating and narrated in Dutch are, according to J Willgoose, the ‘logical next step’. However, these tracks fail to arouse the crowd, particularly as they can’t actually understand what is being said by the sampled narrator.

Nevertheless, as images of steam trains, fighter pilots and warships flash past on the screens and banks of old television sets mounted on stage, the crowd is completely absorbed by what Public Service Broadcasting have to offer. If this is indeed a novelty, then it is mighty fine one. Jolly good show chaps!