The Amps album, Pacer, is not viewed as an equal among the work of Kim Deal. Her albums with the Pixies are some of the best loved American alternative albums ever and after the critical success of Pod and the commercial success of Last Splash she had firmly made her name as the face of the Breeders. Taking some time off from her main act, originally to record the album solo, it is seen as somewhat of a stop-gap release, and is certainly no way near as commercial as her previous album, with nothing to bother MTV in the way that ‘Cannonball’ did.

If you look at the album on its own merits, it is equal to any of her work with the Breeders and deserves to be recognised as a significant mid-90s release and true exemplar of Deal’s unique songwriting. 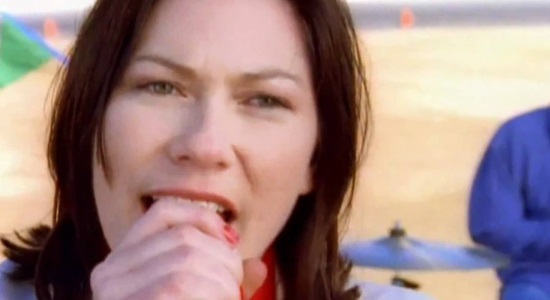 In essence it is Kim Deal’s Guided By Voices moment. The album was recorded using studio time originally booked for GBV, Jim McPherson and Nate Farley (drums and guitars respectively) would later be GBV members and it contains a cover of a GBV track. It also has the loose immediacy that makes Guided By Voices records so enjoyable. After the slick production of Last Splash that may be one of the reasons why it is not rated so highly (although interestingly the original US chart position for Pacer was higher that its predecessor).

The album is fuzzy, rough and ready with some pretty loose playing on show but it is actually a very consistent and enjoyable record. The 12 songs clock in only just over the half hour mark, it is a pretty classic pop album with a lot of personality.

There are no real duff tracks on the album and a handful are classics that should be included on any Kim Deal compilation cassette. ‘Tipp City’, ‘Bragging Party’ and ‘Full On Idle’ (later included on the Breeders Title TK album) would be my three picks for a desert island. Although perhaps my favourite track is ‘I Am Decided’ a version of a Guided By Voices song that bears little resemblance musically or lyrically to the original. (Listen to them  and play spot the similarities).

The Amps – I Am Decided

Guided By Voices – I Am Decided