One man musical cottage industry Darren Hayman is continuing his prolific recent run of releases with this five track EP, composed while staying in a blue house surrounded by the flat grasslands and beaches of Norfolk. 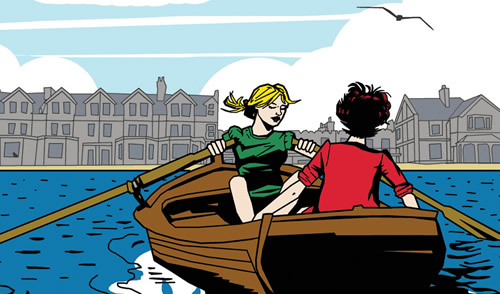 The focus here is less specific than some of his recent releases, which have been about unusual subject such as lidos and witches. Instead the loose theme here is more broad, of life moving on for better or worse, as the middle-aged Hayman looks back on school memories and considers those around him marrying, divorcing and marrying again.

Leaves and Stars with its mix of electric guitar noodling and folk is the key make up, break up and make up with someone else song on this EP. When The School Sold Its Fields looks at the disappearing greenery around schools, which have sold their land for housing estates. But in typical Hayman fashion this is not placard waving stuff at education secretary Michael Gove and his predecessors. Instead Hayman’s approach is more emotional and personal, remembering a sad school memory of the first time he had confronted death, dressed as a ‘China man’ at a PTA international dinner, during a minute’s silence for a deceased head teacher.

Blackleg looks back on changing language and words you don’t hear so much these days, while Kurhaus Blues sees Hayman remembering ruins on a holiday in Austria and imagining them when they were new, something he does frequently. Loose Change is written by his friend Valentune Leys, to return the favour after she sang on one of his previous songs.

Written away from London and with time and peace to reflect on the past and consider the present this is another well executed, thought provoking release from Hayman, whose zeal for constant writing and recording seems to be getting stronger each year.

Blue House was released for the Indie Label Market in November and is available as a digital release and as a  limited edition CD direct from his website Hefnet.