From Nottingham via Manchester to Brighton Michael A Grammar are as English as a shepherd’s pie and pint. 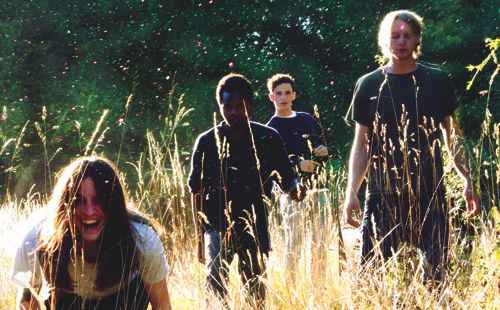 This Midlands four piece, who are now decamped to the south coast, are musically steeped in the sweat and baggy T-shirts of Madchester.  There are two ways of approaching this blatant pilfering of an era. The first is to dismiss them as unoriginal  and urge them to come up with their own sound. The second is to stop being such a cynical so and so and just accept that they are good, whether you’ve heard this kind or music before or not. We fall into the second camp here. They are good. In fact, they are really good and the four tracks on this EP are huge and packed full of confidence and attitude.

Ok, yes, we’ll freely admit that second track Suzanna sounds a bit like Reef, with singer and guitarist Frankie Mockett’s deep vocals and the track’s funky riff. But Reef are pretty much the most famous band from my area of Somerset so that’s another tick in our books.

The Day I Come Alive is about a quarter Stone Roses and three quarters Mock Turtles, but it is such a great tribute to those two bands’ early 1990s era that we’ll forgive the imbalance. Upstairs Downstairs ups the Stone Roses quota and ends up being the highlight of what is a pretty great EP. They at least seem to realise that that more Stone Roses is ultimately a good thing – another tick duly applied. And the guitar work on final track The Way You Move is a joy to behold and takes this author straight back to Reading Festival 1991.

So after hearing this  EP and seeing that they had been the focus of a Guardian article last year I was genuinely shocked that they only had around 100 Twitter followers at the time of reviewing. Surely on the evidence of this EP those numbers are destined to rocket?