Papernut Cambridge is the work of Ian Button, a musician with a career that has taken him through a range of bands including Thrashing Doves, Death in Vegas, Go-Kart Mozart and his current role as the drummer with Neon Filler favourites Rotifer. The 5D-EP is a companion piece to their excellent debut album Cambridge Nutflake which was released last year.

The EP features remixed and electronic versions of four tracks from the album plus a cover version of ‘From Now On There Is Only Love’ from the Rotifer album The Cavalry Never Showed Up (number 2 in our albums of 2013 chart). 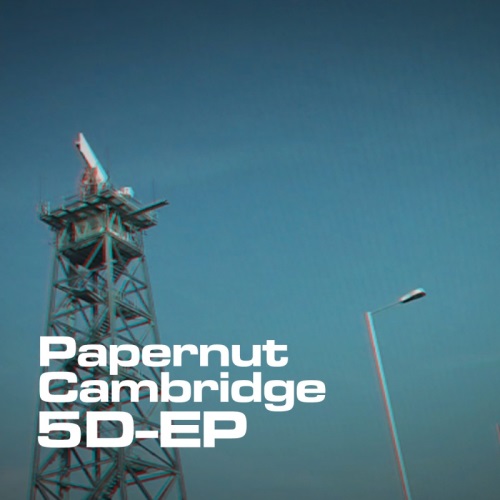 The EP isn’t an essential purchase for anyone who already has the debut album, but it is a perfect introduction to this idiosyncratic and engaging band.

The first two tracks are single versions of their album equivalents and ‘Cambridge Nutflake’ in particular is a wonderful, deceptively simple, piece of garage pop.

The two electronic versions of tracks offer an alternative take on the songs, they may follow the same structure as the originals but they end up having an entirely different mood and feel. These two tracks alone are worth the £3.99 asking price for the EP and ‘Don’t make Me Admit Stuff’ is very deserving of the frequent late night radio plays on 6 Music it has enjoyed of late.

The aforementioned Rotifer cover is a complete transformation from the original, but manages to be just as compelling. Think a slightly doom-laden version of early Devo, with Button’s vocals at their most laconic, and you have some idea of what to expect.

The deluxe version of the EP is well worth an additional £2, offering six tracks recorded live at the Vortex Jazz Club with an all-star band that included Darren Hayman, Ralegh Long and Robert Rotifer.

I said earlier that this EP wasn’t an essential purchase for anyone who has the band’s full album, and that is true. But anyone who does have that album will likely love it enough to want to get more from the band, and this EP is a fine stop-gap ahead of new material planned for later in the year.

You can buy the album from the 17th February here.