Art rock stalwart St Vincent, aka Manhattan’s Annie Clark, recently revealed that she tries to live ‘at the intersection of accessible and lunatic’. If her latest, eponymously titled, album is anything to go by, this is something she achieves with great success. 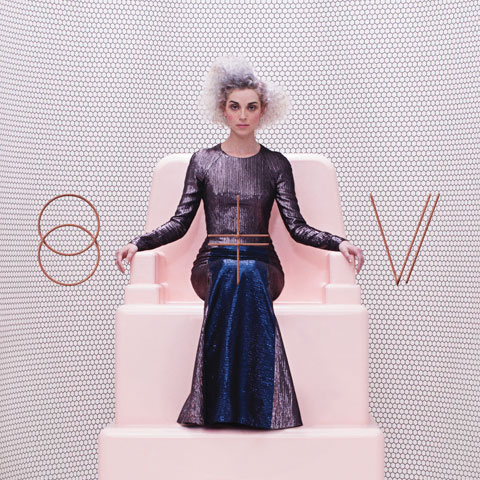 Fans of St Vincent’s 2012 collaboration with David Byrne on the excellent Love This Giant LP will be pleased with much of her new material. Album opener Rattlesnake and single Digital Witness feature the same exuberant, chopped up percussion and cheerful brass and synths, albeit lacking Byrne’s nerdy, longing vocals to complement Clark’s more wispy voice. The energy in the tracks is matched only by their refusal to settle into a groove, pleasingly tugging the listener into new directions whenever it feels like it.

Elsewhere on the album, Clark effortlessly switches between melodic ballads, garage rock and numerous other musical styles. Huey Newton combines, bizarre as it may sound, low-fi hip hop tunes with marching band percussion and, eventually, electro-grunge. Prince Johnny and I Prefer Your Love feature Clark in Kate Bush mode, heartfelt lyrics juxtaposed with choral backing and soaring synths. These are the album’s most moving tracks.

It is Clark’s ability to leap from one idea and musical theme to the next while keeping the listener engaged that is her real selling point. She does this by creating memorable, bold melodies to latch on to fizzing backing tracks, and several of the songs do an excellent job of sticking in the listener’s mind for days. Lyrically, Clark switches from the melancholy – describing her work as party music “you can play at a funeral” – to the mundane. Birth in Reverse runs details her morning routine, including taking out the rubbish and masturbating, and calls to mind Nick Cave’s ability to juxtapose lyrics on everyday happenings with emotional intensity.

While it is unlikely that Clark will ever gain mainstream popularity – something she is certainly not looking for – it remains the case that she produces consistently engaging, challenging material, and this latest album bears testament to that. Her UK tour takes her only to London and Manchester, something which may disappoint her fans from further reaches. However, they are compensated here in this album with new bold, eccentric and memorable material that Clark is so deft at deploying.