Armed with incendiary 2-minute indie firecrackers, fiery choruses and a stadium sized sound Catfish & The Bottlemen are here primed for the big time and aren’t afraid to tell you about it.

Having been impressed last year by these rascally boys from Llandudno, who made our Top Ten Acts To Watch Out For in 2014 list, I was intrigued to see how preparations for their debut album – to be released later this year – were coming along and what progress had been made in the intervening four months since I had seen them. 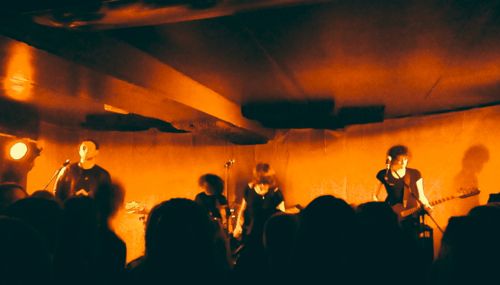 Signs of the strides they have made even in the short time since last we met are all around, from the slicker more substantial merch store that greets us as we arrive, to the swollen size of the crowd that have packed into the Louisiana for this re-engagement.

All clad in plain black post-punk attire they are led by their implausibly titled frontman Van McCann – Miles Kane meets Joey Ramone – and waste no time on introductions deciding instead to dive straight into an extended intro of feedback and swagger that then fuses into previous single Rango. While many of the key elements remain intact from my previous encounter there is clearly a more toned feel to the interplay and a discernibly stronger audience reaction with the crowd returning every line from the off.

The ‘it’ factor is an entirely subjective notion but as McCann’s scouse charm (half comedian/half front man) beguiles the crowd it becomes obvious that his very blood runs thick with the stuff.

He later admits that he is indeed a test tube baby (a fact that has inspired the bands obsession with spermoza – see video for Rango and band logo) and perhaps this is where his charismatic, yet endearingly modest, genealogy was crafted.

New single Kathleen sits confidently amongst their other hits and as they recount has just that very night been named by BBC radio’s Zane Lowe as his Hottest Single in the World – the second time they have received this recognition.

Storming through song after song Pacifier could almost be mistaken as the theme tune to This Life dripping as it does with enough 90s musical nostalgia that would make an Elastica reunion seem palpably modernist.

They have indicated prevously that they have three albums worth of material already and at points they do wander from the more familiar path into the murkier waters of experimentalism (see Hourglass, Alabaster and Test Tube Baby ) to see what works and what doesn’t around their core numbers as the lineup of their debut album is finalised.

Homesick is still their standout track and is a two minute howitzer that explodes from a strummed intro into its stadium sized chorus. Hands reach out desperately into the sticky air to salute as lines are sung raucously to the sky like any closing-time classic worth its salt.

The Bottlemen leave it all on the stage and finish with standard closer Tyrants. A six-minute stomp whose stampeding start sounds like the soundtrack to the closing scene of a heroic western and brings proceedings to a halt with an exclamation mark!

Genuinely moved by the whole experience McCann invites all and sundry to join them for a drink afterward in a way only he could make sound inviting and not boastful and by the throng that await their arrival downstairs afterward its clear he has the common touch. How long this personable interaction can survive as their ascent continues apace is a conversation for another day. Catch the Bottlemen while you still can.