After the damp squib that was 2011’s electronica focused  album The Grandad Galaxy, Voluntary Butler Scheme (aka Rob Jones) is back with a big fat old horn section and crucially his sense of fun.

Of his three albums so far this is by far the superior. It has the whimsy of his debut, At Breakfast, Dinner, Tea, but also a collection of poptastic tracks to rival the two great singles, Do The Hand Jive and To The Height Of A Frisbee, that came from the otherwise dour Grandad Galaxy. 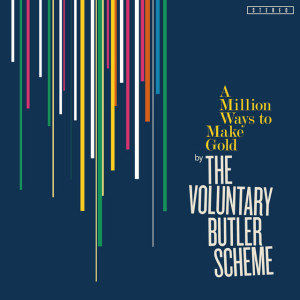 Brain Freeze, with its awesomely danceable riff, is just one of many highlights, as is opening  track The Q Word, which starts off a little like Postal Service or even Sufjan Stevens’s Age of Adz tracks, before this album’s trademark brass bombast kicks in midway through.

Looking for Nearby Water also stands out. This McCartney-esque track must surely have emerged from a few listens of the ex-Beatle’s early solo work. Another to catch the ear is my favourite, That’s How I Got To Memphis, which is Sixties pop with a good dollop of Gene Clark style heart.

The brass section is one of the main stars here but remarkably this has not been provided by a hired ensemble. It is Jones himself, who learned the trumpet, tenor and baritone sax via Youtube tutorials.

There are a few versions of Jones around; talented home studio artists producing slick, fun pop that  may get used in ads and on TV to pay the rent, but whose work will largely go unrecognised. Jones and Jim Noir are the best at it and are still plugging away thankfully despite  the bitter irony  that so few will hear their wonderful, accessible pop music.