Full of smiles, School of Language kicked off their Spring tour in Bristol, with an amiable and fun gig at the Exchange. Although a solo pop/funk project of Field Music’s David Brewis, this tour has a full band feel with his brother and Field Music co-creator Peter on drums, along with Hazey Jane’s Andrew Mitchell on guitar, Andrew Lowther on bass and The Futureheads’s David Craig on synth. 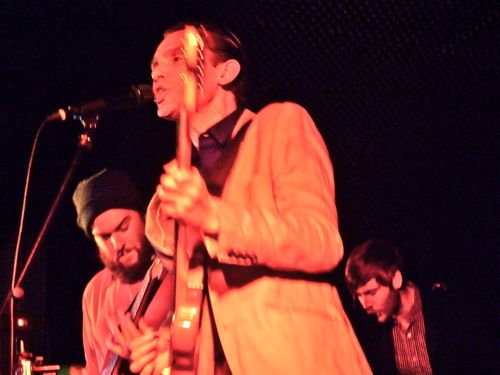 Even before they started playing the audience were aware this is a band with a sense of fun, as they made light of having to be their own roadies by taking to the stage to set up in ‘Field Music Productions’ branded caps and boiler suits, smirking throughout.

A quick change into shirts and in David’s case a rather smart grey suit jacket and they take to the stage, with smirks turning to smiles as one member of the audience shouts out “where’s Devo” in reference to their earlier attire.

David is on the road to promote Old Fears his second School of Language album. Although unmistakably Field Music with its angular chops and changes, it is a far more funkier/pop affair, with Prince’s Dirty Mind as an influence.

Live the guitars are much more to the fore, giving the album a far more Field Music feel, which in particular for tracks such as set finale So Much Time, give David and the band a chance to really show off their intricate playing. 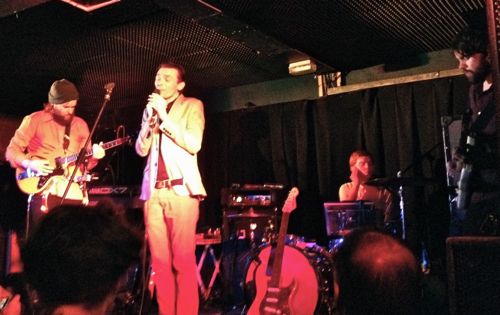 Highlights were key Old Fears tracks such as Between the Suburbs as well as highlights from his first school of Language album Sea From Shore, especially Rockist (Part 1) which was greeted with rapturous applause.

During each song David is exemplary in his focus, concentrating on hitting just the right notes and just the right intricate guitar lick as he interweaves superbly with Mitchell.  Peter too on drums is full of focus playing the drums like he’s operating some kind of giant computer from the 1950s. All throughout they give each other knowing smiles. This is a bunch that clearly enjoys the whole process of performing and making music, something that the audience really picks up on and revels in.

Thankfully David and the band didn’t slip into any Field Music songs, even to fulfill a an audience members’ encore request for “covers.” In the end the encore was turned down “not because I’m being coy, we just don’t have anymore songs,” explained an apologetic David at the end. 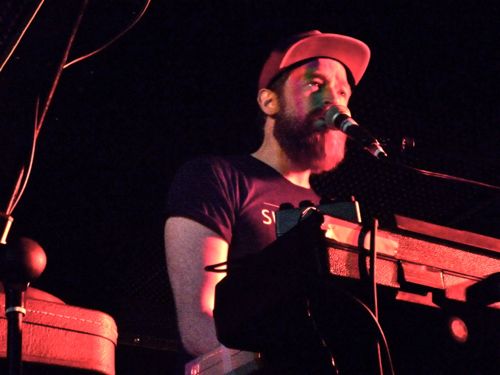 Support was provided by London’s Barbarossa, a synth, drums and beards duo who are also on Field Music and School of Language’s label Memphis Industries. Their sound quality wasn’t as clear and crisp as School of Language’s with one particular bass buzz driving a few to the toilets, but there was enough tonight to know this is a fine act, with vocalist James Mathé superb singing, which is reminiscent of Talk Talk’s Mark Hollis, shining brightly among their electronica. Mathé tells us that a new album is in the offing and is one I’ll be looking out for based on this performance.