Last year Camper Van Beethoven came back from a 9 year recording hiatus to release La Costa Perdida. It was a decent return and it is good news for fans of the band that they have taken only a year and a half to release the follow-up, El Camino Real. 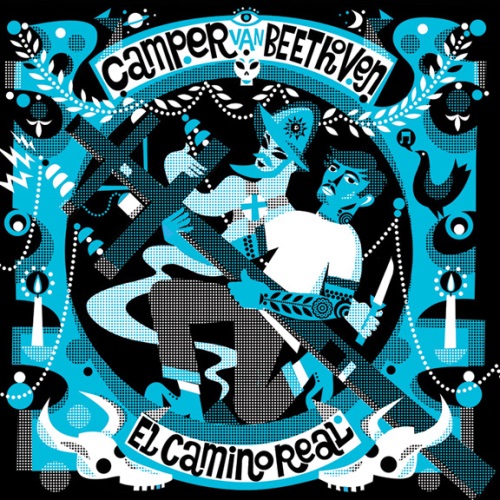 This album acts as a counter-part to its predecessor, focusing on Southern, rather than Northern,  California as the inspiration for the songs and music. The band seem to have more affection for the Northern parts of the state as this album is less nostalgic and affectionate with a more downbeat feel.

Musically it kicks off with a track, ‘The Ultimate Solution’, that sounds so quintessentially Camper Van Beethoveny that it almost disappoints. The band are clearly not looking for the wild invention of their comeback record, New Roman Times, they just want to play a set of classic songs.

The second track, ‘It Was Like That When We Got Here’, is great but sounds like it would be more comfortable on a Cracker record. Things kick-off in earnest with the brilliant ‘Classy Dames and Abel Gents’, a song that would have fitted in perfectly on either of the albums the band recorded for Virgin in the late 80s.

‘Camp Pendleton’ is possibly my favourite song on the album, all the elements  working together perfectly, and some of the more interesting lyrics in a lyrically strong set. The playing is subtle and sophisticated with each member of the band playing a part in making the track a little bit special.

Less subtle, but no less enjoyable, is ‘I Live in LA’ which is a great example of one of Lowrey’s more sardonic character studies. It is slightly repetitive but one suspects that is part of the point.

Camper Van Beethoven may not be as exciting as they were in their first phase, or as adventurous as on their first time back, but they still know how to produce a very satisfying set of songs. This album couldn’t be by any other band and it is a very welcome addition to their discography.