We talk a lot about pop music here. Not that modern rubbish, obviously. The good stuff from the 1960s, Paul McCartney and David Bowie stuff from the 1970s or New Wave hits from the early 1980s. We look for those three minute pop gems with their bright, crunching guitars, oh-so clever and bittersweet lyrics and synths in most new music. When we find it we hold it high on our pop pedestal. Earlier this month Papernut Cambridge, the ensemble cast assembled by former Death in Vegas man Ian Button, scratched our pop itch with There’s No Underground, an ode to suburban pop through the decades. Now its Jim Noir’s turn to dazzle us. 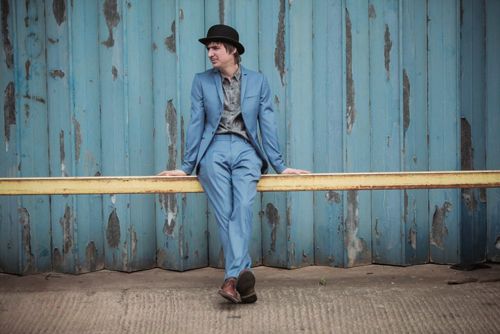 Noir, aka Alan Roberts from Davyhulme, Greater Manchester, has always had a great ear for a catchy pop tune. Since his debut EP Eanie Meany in 2004 he has been channeling all our favourite pop influences to great effect and Finnish Line, his fifth album is no exception. But while Button’s canvas was the surburbia of Sidcup, Noir’s is grimy post industrial Greater Manchester, with this album recorded in a former mill in Ancoats.

The results though owe more to Liverpool than Manchester, with McCartney’s influencing looming large. In the press release sent to us Noir is unabashed in his adoration of all things fab four. He says: “I’m not trying to consciously channel The Beatles, it just happens that I do have a lof the intruments they used and its hard to not want to go near that sound of slightly wonky drums, sharp guitar, moving bass and loud vocals. What’s not to like?”

So while Tower of Love, his debut album, was more about synth pop and 2012’s Jimmy’s Show more psychedelic pop, Finnish Line ends up being packed full of Macca influences, particular his Ram solo era. Piece of Mind and The Boy, towards the end of the album, are exactly the kind of slight melodic pop McCartney excelled at in the early 1970s.

On Stone Cold Room the opening piano is pure Beatles but more John Lennon  than Macca. It is even reminiscent of Neil Innes, whose Rutles creation frequently matched the Beatles it was set up to lampoon.

But Noir isn’t all about sounding a bit like the Beatles. On The Broadway Jets he’s his own man with this more reminiscent of his own earlier pop nuggets. Strange Range too is different, far more glam rock than McCartney and co attempted in the 1970s.

In recording in a studio this marks a change for Noir from bedroom recording to a more professional set up. It’s a good move on this evidence and while  his earlier albums are great this feels like his most complete and polished yet.

The future of pop’s past is in good hands.