Some of the south west of England’s best acts were out in force at Glastonbury Calling, the annual eclectic, one-day festival now in its second year.

With Glastonbury pubs The Hawthorns, The Riflemans, Market House and King Arthur involved, as well as the larger Assembly Rooms and Bocabar, it was as much a showcase of the town’s wealth of venues as its array of talented musicians.

It was the pub venues where we focused our attention, starting at The Hawthorns. Complete with newly knocked through wall this town centre venue now offers a two tier view of the stage. 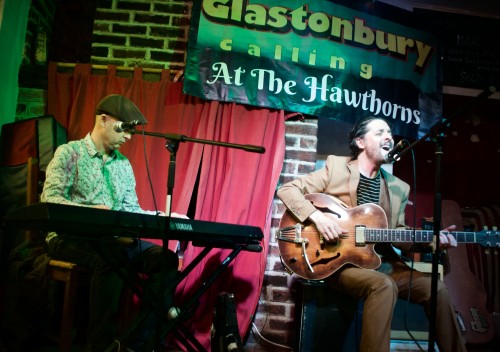 As host to the town’s regular open mic event as well as local artists’ gigs, Hawthorns is  a home away from home for many of the acts. This includes Glastonbury based Flipron, who on the day eschewed their usual four piece psychedelic pop band persona to present a lounge set, involving singer and songwriter Jesse Budd and Joe Atkinson on keyboards.

It was a stripped back feel that worked particularly well, bringing their late 1960s psychedelic side to the fore and saving the more 1990s indie rock aspect for another day.

Among highlights was Orpheus Inconsolable, a whimsical ditty from their Gravity Calling album that features some splendid Roger Whitaker style whistling and could have come straight out of 1967. Mingers in Paradise, from 2006’s Biscuits for Cerebus album and about aging disgracefully, also worked well in this laid back set. 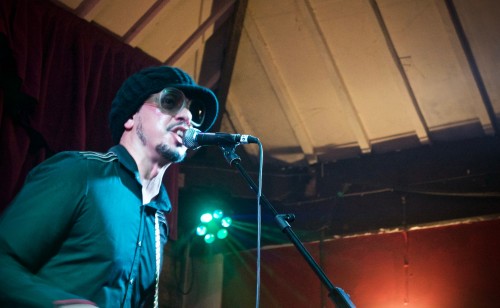 A quick five minute walk took us to a polar opposite gig, the windowless back room of The King Arthur where Bristol heavy rock trio Gilda Parade were churning out tracks, such as their 2015 single Devil in Me, at a rate of knots.

Yes, they are full of the rock clichés, such as wearing shades indoors. But with self deprecating banter it was clearly partly tongue in cheek. They offer far, far more than mere clichés too across their tightly played set full of jerky rhythms and dramatic stops and starts.

Next up, back at The Hawthorns was Glastonbury based Duncan Batey, winner of the 2012 Somerset Songwriter competition and playing tracks from his impressive 2013 EP Blindsided.

The arrangements, featuring Dan Shaw on double bass and slide guitar, and Gerry Barnett on cello, brought out the melancholy, thoughtful side to his songs. This also gave his impressive vocals the chance to shine across a passionate set. 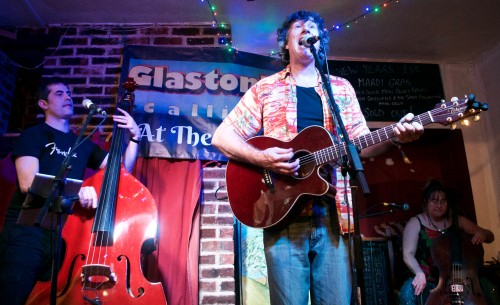 The Rifleman’s was the venue for our final Glastonbury Calling act of the afternoon. This is one of Glastonbury’s oldest pubs, with a 16th century bar at the front and a warren of rooms stretching out back.

Taking the pub’s schedule from afternoon to the evening was Owl in the Sun, a Somerset based quintet that features two married couples among its members. But the similarities with Fleetwood Mac stop there as they put in an entertaining set blending Americana with gypsy folk and jazz.

Owl in the Sun are one of those bands that I challenge anyone to dislike. Their set was fun, engaging and full of beautiful vocal harmonies. It also finished off with one of the best flute solos I’ve seen live. 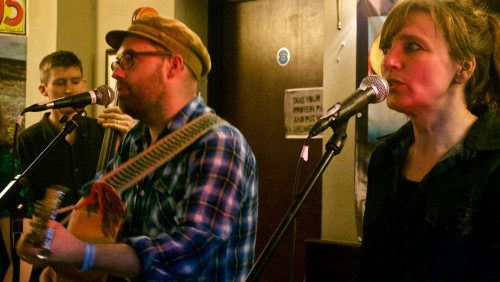 Owl in the Sun

There was plenty more to go into the evening. Bristol reggae act Laid Blak headlined the Bocabar’s list, DJ sets were carrying on at The Market House and the Assembly rooms featured The Truthseekers, Safehaus and Lazy Daze among others. In total more than 40 acts took part.

One of the main points I take away from my day was how great it was to see every venue busy and full of smiles, with the crowds out in full force, eager to hear new music and see familiar acts alike.

I’m looking forward to next year’s Glastonbury Calling already, as this one day event continues to impress and make its mark on the west country’s already famous festival scene.