The popularity of Public Service Broadcasting grows exponentially, rather like one of the graphs on the visual projection screens behind them on stage.

From very humble cash strapped beginnings in 2009, they now command a small South American country’s bank balance to bring you an EVENT, rather than the budget constrained show of yore. 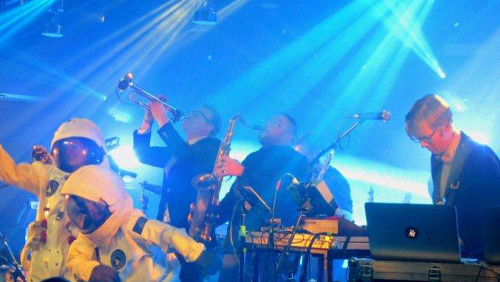 The cardboard televisions and the cheaply constructed sets are now a thing of the past.  They now embrace a George Lucas approach to live performances.

Once merely a duo they have now mutated into the population of a small town in Bedfordshire.

It is difficult to comprehend the journey the two heroes of Public Service Broadcasting,  the sensibly named J Willgoose esq and drummer Wigglesworth, embarked upon all those years ago.

They have gone from small crowds of bewildered onlookers via a mindblowing set at Glastonbury in 2013 to this – a sold out tour in 2018. They deserve it. Their music is tremendously effective, cleverly interweaving movie and documentary dialogue with tasty instrumental tunes.

They also now have a considerable back catalogue to draw upon. But they start with selections from the new album Every Valley. This is a concept piece based upon the trials, tribulations and plight of Welsh coal mining communities back in the day.

The subject matter, despite being very moving, worthy and historically interesting doesn’t lend itself well to a rock show, After all, there is only so much black and white footage of Welsh coal miners struggling to survive economic desperation that you can take.

But never mind there’s always the Spacerace to freak out to, with footage of rockets and explosions and dynamic guitar riffs, married to Kraftwerkian keyboard funkiness.

The set then veers sharp left into the oncoming path of Sir John Betjeman with a fantastic rendition of Night Mail.

Then into what most consider their most rocking song Spitfire. In in an ideal world this would be our new national anthem.

The addition of a three-man brass army to Public Service Broadcasting on stage is most welcome. At times it’s not unlike James Brown’s backing band playing with New Order.

One regret was the absence of the Margaret Thatcher footage they played back in the summer to accompany one of the tracks from the new album.  It had the entire crowd booing and swearing at her image.

Three members of Haiku Salut join the band for a lovely version of They Gave Me A Lamp.

In addition, Go! was total overload great – a real techno frenzy of lights, action and men in dickie bows.

Lit up, the one that includes snippets of Thomas Woodroofe’s infamous incoherent report of a passing naval flotilla from Portland in 1937 whilst completely pissed, was a hoot.

While for the encore they gave us the traditional closer, Everest, with its beautiful floating melody swirling around our buzzing heads.

Tune in next time for more thrilling adventures in sound and space!