We’ve been relatively quiet on the site this year, and personally I’ve struggled to find anything to write about since lock-down started. I’ve enjoyed listening to music, but the differences in circumstance definitely changed how I was engaging with it. I certainly didn’t feel much like writing about it.

It isn’t that I wasn’t hearing new music, there have been some great new albums this year from the likes of Rolling Blackouts C.F, The Orielles and great reissues from Guided By Voices, Yo La Tengo and others. In fact my record buying increased as a conscious effort to help my excellent local record shop Resident. Part of the problem was that (for a long while) I was relying on delivery or the rare occasions I could time a trip to town to pick up a pre-ordered record and that added extra effort. The other problem I found was the lack of live music. I much prefer covering gigs to reviewing albums, and seeing all the events I’d planned on attending get cancelled one by one was dispiriting.

In order to get some music, and a social form of music at that, I looked for other ideas. For a few years now myself an a friend have been DJ’ing as The Jangle Brothers. Our aim was to play the music we love, a lot of which we didn’t see being played in our native Brighton. Most of the music we play is what gets classed as indie or alternative, but we wanted to do something a bit different. Moist indie nights are fixated either on the 80s or the Brit-Pop era, occasionally coming as far forwards as The Arctic Monkeys. We wanted to play music from all eras, and also celebrate some of the great bands releasing albums today. We set ourselves very few rules beyond that other than adopting a strict “no lad rock” policy.

In the most part we played in local pubs and at parties and weddings. One of the high-points of last year was being DJs at the Larmer Tree Festival silent disco. Much fun had by all in the woods.

With no ability to play, or even go to, pubs we decided to try something different. We came up with an online night called Decades. 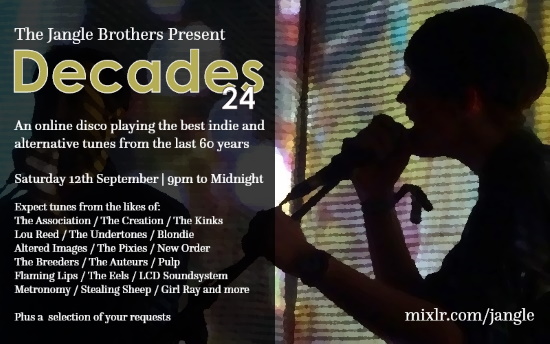 Decades is an online music night that we put on every Saturday evening between 9pm and midnight at Mixlr.com/Jangle. Originally we very much saw the night as an at-home disco, but it soon became apparent that it was something different from that. It was an opportunity to hear and share great music, and to engage with other music fans.

Why is it called Decades? Well not just because it’s the final track on Closer by Joy Division. For the first two hours, we play 20 minutes worth of top notch indie racket from the 60s, then the 70s and so on, through to the 2010s. Then for the last hour, it’s a free for all and requests from the listeners. We keep things social via the chat window, which has become a lovely thing. Over time, we’ve built up a friendly little community where we chat about the music we’re hearing, along with whatever else people want to talk about or share. Using emojis to describe songs titles has also become something of an art form.

This coming weekend sees our 24th event. Over the weeks we have come up with different themes for the evenings, sometimes the theme is a style or mood of music, sometimes a subject, sometimes music from different parts of the world. Last week and this coming week we decided to make the sets a kind of best-of. Some of our favourite songs and loads of songs that have gone down well in previous weeks. You can hear recordings of most of our previous sets on our show-reel page.

One day we hope to be back out at gigs, and playing music to people face to face. Until then we’ll continue to try and build an online community. Come and join us.

The next Decades event is on Saturday 12th September and you can take a look at the Facebook event. Decades takes place between 9pm and midnight every Saturday night at Mixlr.com/jangle.