Considering the world has gone to pot due to Covid-19, the Mountain Goats have been relatively prolific in terms of album releases this year. Fresh from releasing his DIY album Songs for Pierre Chuvin at the start of lockdown, John Darnielle’s troop are back six months later with Getting Into Knives. 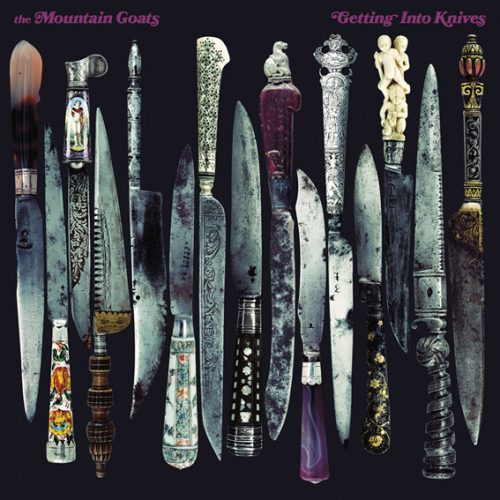 Recent releases have been more thematic, such as focusing on goths, wrestlers and even pagans. Here Darnielle’s crew offer broader themes of loss and fear, You know, the usual emotions during a global pandemic.

Recorded in Memphis pre lockdown its beautifully produced. This is unsurprising given at the mixing desk is Matt Ross Sprang, who engineered the Goats last pre-lockdown release In League with Dragons.

Darnielle’s song writing is on top form, as per usual. Stalwart Peter Hughes as reliable as ever on bass. Jon Wurster’s drums once again adds rhythmic emotion as only he can. Meanwhile, becoming a quartet with multi-instrumentalist Matt Douglas a while back has benefitted them in particular, especially adding woodwind to the mix.

There’s some proper hits on Getting Into Knives. Get Famous is particularly marvellous with a fabulous chorus and superb woodwind and horns.

Their lo-fi lockdown album Songs for Pierre Chuvin ended up a top ten selling album in the UK. Could this more lavish release repeat that feat for The Mountain Goats – Getting Into Knives?

The Mountain Goats – Getting into Knives is released on Merge Records.