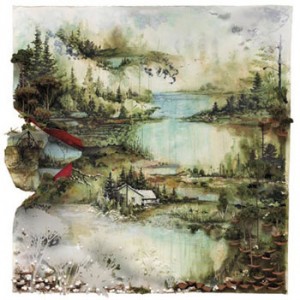 Those that loved For Emma, Forever Ago, the stunning debut from Justin Vernon recording as Bon Iver, are going to have to get used to the fact that was a one off.

Its unique song writing process is not going to be repeated. He is not going to sit in a log cabin for three months in the winter and pour his heart out in song again. He may never produce a low-key tender album like it again. That period in his career is over, done with, finished.

Those that cannot accept that should avoid Bon Iver, Vernon’s self titled follow up album like the plague. Those who are open to Vernon moving on with his career may just find something to like.

Bon Iver, the album, is the work of an altogether different Vernon. A successful Vernon, who has turned Bon Iver into a well-respected live act, is a successful recording artist and has collaborated with Kanye West.

This is not the same pre For Emma Vernon who was essentially a failure, in love and music, who holed up in a log cabin to pour his heart out.

One of the major changes is that he has transferred elements of his festival sized live sound into the studio. This for us is where Bon Iver is most successful, especially as we were left impressed when we saw Vernon’s well-crafted rock act at The Breeders ATP festival in 2009. 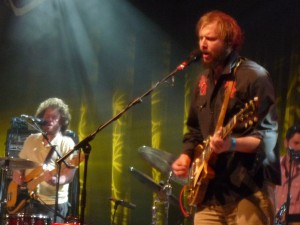 Tracks such as opener ‘Perth’, with its atmospheric electric guitar intro and military drumming, capture  the ‘Bon Iver as rock band’ notion perfectly. So too does ‘Towers’, starting off like something from REM’s early catalogue and featuring some beautiful trumpets. ‘Calgary’ is another that left us impressed and is sure to be a live favourite as Vernon rises higher up festival bills over the coming years.

Another highlight is ‘Holocene’, more low key but arguably the most beautiful on the album.

Sadly the rest of the album is not as strong. ‘Minnesota WI’’s strange reggae rhythm and RnB, yes that’s right I said RnB, vocal style sounds a little like his experimental Volcano Choir work, but without the atmosphere. The saxophone on this track just sound weak as well, especially when compared to the sax-tastic album Kaputt, released by Destroyer earlier this year.

‘Hinnom, TX’ just sounds bland, like a Kanye West filler track. Worst of all is ‘Wash’, which reminds us of Enya with its drifting, washed out vocals. As for  ‘Beth/Rest’ this sounds like Chris De Burgh with its cheesy keyboards. This final track on the album is quite frankly an embarrassment.

Even though we are among those who recognise Vernon’s need to move on with his music this album has too little of what he is good at as a live musician, very little of the subtlety of For Emma and above all no killer tune or melody.  As a friend pointed out recently “it sounds a little like Toto”, surely a compliment in comparison to Enya.