Love At The Bottom Of The Sea is the 10th album by Stephin Merritt’s Magnetic Fields, and his first for 13 years to use synths in the recording. More significantly it is the first album since 1995’s Get Lost to not be based around a single thematic concept. After the career defining 69 Love Songs the “no-synths” trio based around the first-person singular (I), the Jesus And Mary Chain (Distortion) and twee folk (Realism) have all had great moments but been a little disappointing. Recent interviews with Merritt have seen him admitting that 69 Love Songs was meant to be career defining moment and he knows that his work will never live up to it. Looking a this album from that perspective takes the pressure off the band, but also encourages you to listen to the album on its own merits. 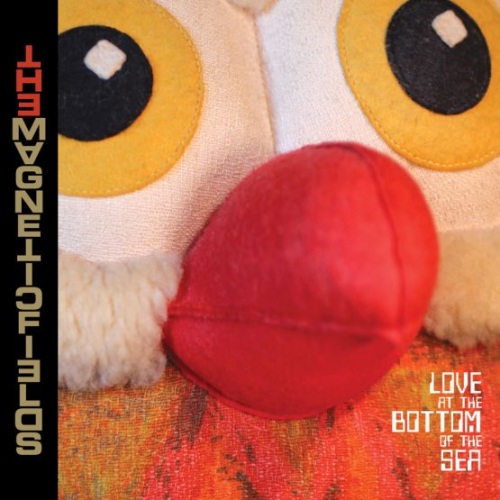 The return of synths, and lack of an obvious theme, definitely mark the return of a more “classic” Magnetic Fields sound and feels like Merritt is enjoying the relative freedom this brings. The result is his most enjoyable set of songs since (if we take 69 Love Songs out of the equation) Get Lost, a full 17 years ago. It is also a very economical set with the songs all sitting just over the two minute mark, the longest being 2:37, and that reflects a desire to produce classic pop.

Lead single ‘Andrew In Drag’ is catchy pop at its best and features typically sexually ambivalent lyrics  against a classic synths and acoustic instrumental backing. A more conventional artist would have lead off the album with that track but Merritt chose the bitchy ‘Your Girlfriend’s Face’  sung by serial collaborator Shirley Simms to open proceedings.

The opening third of the album is great and features typically excellent lyics among the familiar sounds and arrangements (truth be told the return of synths is not as significant a change of sound and you might think) and any fan of the band will find much to enjoy. The middle third is more of a challenge, but reveals more rewards with each listen. My first response to this section wasn’t positive, but a few more listens and I had an almost total change of heart. Some tracks have pretty difficult moments, I’m am still unconvinced by the dischord in ‘I’ve Run Away To Join The Fairies’ but a Stephin Merritt is never designed to be a totally easy ride. Even 69 Love Songs has a few track that I am forced to skip on each listen.

Towards the end of the album we have some of the best songs, and songs that return to musical themes that Merritt has played with before on more than one occasion. ‘I Don’t Like Your Tone’ could be an  out-take 69 Love Songs and ‘Quick’ sounds so familiar that you wonder if it has appeared on another album already. This matters little, however, as Merritt is very open about reworking ideas and these are two of the best songs on the album.

Scoring an album like this is a difficult one, I like the record a lot but I know that it isn’t going to be for everyone. It is unlikely to convert a non-believer to The Magnetic Fields and is not the best starting point for a new-comer (there really is only one place to start). However, if you like the band, or just want to hear one of the best songwriters around creating some truly unique work, then you could do a lot worse than give this album a spin.